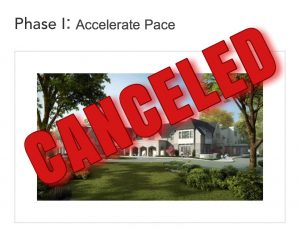 The Accelerate Pace Campaign has been officially canceled. Photo: https://www.paceacademy.org/

As of March 30, the Accelerate Pace Lower School construction project has been put on hold. Due to the dramatic downturn in the stock market, signaling an impending recession or even depression, major donors are no longer confident that they can meet their financial pledges for the project. Therefore, the new Lower School that was set to open in August 2021 will no longer open its doors.

Instead, the designated classroom space that was to be created in this campaign will now be relocated to the Assaf family house. Despite various concerns, the Assaf family will continue living in their house but will coexist alongside lower school students.

The Assaf family has already begun preparations for this by clearing their living room for desks, books and smart boards to be moved in. “We are very sad about the cancellation of the lower school project, but we as Pace family will persevere,” said Head of School Fred Assaf. Pace junior and youngest member of the Assaf clan Tommy Assaf plans to give up his bedroom in order to make extra space for study rooms. He plans to live in a study room in the Upper School once it reopens.

While the lower school teachers are deeply saddened by the situation, they are hopeful that the project will take place in future years when the market recovers. “These students need more space, and I just don’t think the Assaf house will be able to accommodate our needs,” said second grade assistant teacher Judy Body. Ms. Body plans on keeping all of her students’ books at her home and bringing them to and from the Assaf house daily.

The space concerns are not only felt by Ms. Body, but by many of the lower school teachers who worry about the relocation to the Assaf house. “We are more than grateful that the Assaf family is willing to share their house with us, but I’m just not sure if it will be the same as a regular classroom,” said Spanish teacher Poliana Aparicio. “It will definitely be an adjustment.” Ms. Aparicio’s class is set to take place in the Assaf family’s kitchen.

As the iconic Randall House has already been torn down during the first phase of the construction project, there will be no formal entryway to the Lower School anymore. The students will enter directly into the cafeteria when entering the lower school building. The cafeteria will be updated to include a full kitchen along with staff to prepare food directly in the Lower School. “I’m excited for food to be prepared in the Lower School so it is more fresh, but I know everyone’s a little disappointed about there not being a new cafeteria,” said fifth grade head teacher Rebecca Rhodes.

As of right now, the fifth graders will most likely be the students who move into the Assaf family house as they are the oldest and most mature. “We are hoping that this change will show the fifth graders how to be resilient as we make these necessary changes,” said Mr. Assaf. Since the school will not be waiting on new construction to be completed, Mr. Assaf has given the go ahead for classrooms to be relocated to the headmaster’s house at the beginning of the 2020-2021 school year.

The fifth graders are not thrilled to be moving into the Assaf house next year. “I’m just glad that we are moving into the Middle School after next year so we won’t have to work in the Assaf house for too long,” said a fifth grade student who chose to remain anonymous. The Accelerate Pace campaign posters around campus will be taken down and all who contributed to the campaign will be asked if they would like a refund.