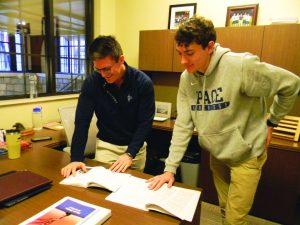 Every year, a Pace faculty member is chosen to be the dean of the incoming class of freshmen. As the class goes through their four years in the Upper School, their dean acts as a mentor and advisor from their first day of freshman year until graduation.

Class of 2020 Dean Grady Stevens, who also teaches Latin and freshman history, became interested in the role of dean when he first joined the Pace Academy faculty in 2014. “When I got to Pace, one of the first things I learned was that there was this student advocate role that was different than anything I’d come across,” he said.

Something that caught his attention was the way a dean and a class forge a really tight bond over time. “I came to Pace because I was inspired by the educational model, but also because it provided a space where faculty and students were so supportive of one another,” he said. “It became clear to me during my first year that an important part of that symbiosis was the office of the deans.”

The role of a dean becomes smoother over the years as each dean builds relationships with students and their parents, and as students themselves figure out how to navigate high school. Just as freshman year is often the most challenging year for students, it’s also a challenging one for deans.

“There’s a chaos to the freshman year,” said Mr. Stevens. “You’re trying to mediate conflict and advocate for students but also trying to build relationships so that students trust you, and then you’re also trying to do the same thing with the parents. I look back on that year really fondly with this class, but it was very hectic.”

Although Mr. Stevens looks back on freshman year as a time of learning and growth for both his students and himself, senior year has been his favorite year so far.

“Seniors are interesting,” he said. “They’re becoming adults, and they’re forming their own opinions. They’re starting to define for themselves what it means to live the good life. They’re making decisions that are going to affect the rest of their lives, and they’re being thoughtful about it. Seniors start to implicitly live their values because they start to have more freedom to make decisions.”

When it comes to giving advice to younger members of the Upper School, Mr. Stevens advises that students learn to trust their teachers and their deans. He said that the students who are most successful “are those that early on realize that the faculty are here to help them.”

Senior Mae Shippen, who has worked closely with Mr. Stevens as a Latin student throughout her time in the Upper School, agreed. “My biggest advice is that your dean is there to help you. They want to talk to you, and if you just pop your head into their office, they really have the best advice.”

Her freshman year, Shippen decided to switch into Latin, and Mr. Stevens worked with her to catch her up with her classmates. “Mr. Stevens, along with a couple of other teachers, has been the reason I’ve loved my experience at Pace,” she said. “Through working with him as a teacher and a dean, he has taught me what it means to love a subject in school and to realize that high school is just the beginning of your life.”

Mr. Stevens also advises students to become involved in the Pace community in whatever capacity interests them. “Find ways to bring your talents to our community – it doesn’t matter what it is – whether it’s theater, debate, athletics, esports, dance marathon or whatever else,” he said.

As his time as a dean comes to an end, Mr. Stevens looks back fondly on his time with the Class of 2020 and said that it was the best thing he’s done in his professional experience. Mr. Stevens was nervous about the four-year commitment, but said that the experience had been “amazing.”

“Love is a word that’s often tossed around, maybe too much, but when I think about why I’ve done certain things – stayed late to talk to a kid, spent time working on the weekends, etc. – I have no explanation other than that the dean comes to love the whole class,” he said.

“It is a kind of love that I wasn’t sure was going to happen, but has grown over time and has been very rewarding. When I wake up in the morning to come to work, I know that I’m not just getting ready to show up and just do a job – I love these kids, and I love this place, and I can’t wait to get started. I am really excited to see where this class goes from here.”