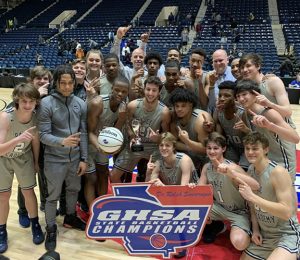 The Pace community gathered to support the boys varsity basketball team at home in the Inman Center on Saturday, Feb. 15 as they began their playoff journey to win the state title game. The Knights won their first round game against North Hall by a score of 80-37, stunning many people across the state who did not believe Pace had what it took to make a run. “We understood what playoffs meant and truly brought everything we had to the game,” said junior and team captain Cole Middleton.

Pace faced Beach High School at home on Feb. 19 in the Sweet 16. “I read the guys a few quotes from a Savannah newspaper where Beach was saying they could come down and bully Pace, and we were not going to let that happen,” said head coach Sharman White. Beach’s bully mindset did not phase the Knights, as they matched their energy and fended off the Bulldogs 61-32. “That game really told me that we were locked in for playoffs,” said senior George Adams.

Pace’s Elite Eight game was set against Monroe Area: a third-seed, Region 8 team with a lot of confidence coming off back-to-back upsets in the first two rounds of the playoffs. Monroe Area had two very effective shooters along with a tough defense, and the team hoped to continue to use this strategy against Pace. As the Cinderella team, Monroe Area brought out many fans to the game, filling up the far side of the Inman Center across from the Pace fans.

But the loud cheers of the opposing team’s fans were silenced as Pace slowly gained a huge lead; after this run the only cheers that could be heard were those of the large Pace student section who had packed the house on Feb. 26 for Pace’s last home game of the season. Pace went on to win by a score of 65-40, and that wide margin allowed every senior player to touch the court for their last game in the Inman Center gym. “It was bittersweet because I was sad knowing it was my last game, but happy to end on a high note,” said Adams.

Heading into the Final Four, the Pace Knights had to travel four hours down to Valdosta State University to play Johnson-Savannah High School on Feb. 29. The team left Atlanta a day early to avoid a four-hour drive the day of the game. “I could tell from the moment we got on the bus that we were locked in,” said Coach White.

The team had a walkthrough at a local high school to prepare themselves for the day’s game and then headed to the arena. The team was not alone for this journey, as weight coaches Sekou Walton and Ty Johnson traveled to all the playoff games to warm up the team before each contest.

Right before game time, Coach White had team manager and senior Lucy Ferry, who had won three volleyball state championships in a row, speak to the team for a little extra motivation. “Coach had brought in speakers over the course of the year to help inspire us, and that last one really helped us because it came from someone we were all really close to,” said Middleton.

The team took the court and exploded that night, beating Johnson-Savannah by a score of 75-46. “Our press had proved helpful in many games, but it was really effective against them and really helped us separate,” said Adams.

Pace was officially set in the state championship game on March 5 against Jefferson High School. “I thought it was gonna be a fair fight until I saw this,” said Coach White as he showed his team a picture of a banner Jefferson High School had made, announcing a “winning state” party the day after the game. “I know it really got me – and I am sure the other guys as well – super fired up,” said Middleton. The team headed down to Macon and went through the same routine they had in the Final Four, having a short walkthrough at a local high school, then heading to the game.

The Knights started off very slow, especially on the offensive side of the ball. The Dragons jumped out to a 9-0 lead before junior Matthew Cleveland scored first for the Knights with a three-pointer. At the end of the first quarter, Jefferson was ahead 13-3.

Middleton helped Pace get back into the game in the second quarter, scoring eight unanswered points, but the Knights were behind at halftime 20-13. The Knights showed signs of life in the second half, but the true surge came from seventh man Adams who scored nine straight points as well an assist. This run started with an “and one” three-point shot that brought everyone in the arena to life.

“That three that he got fouled on kind of led the charge,” Coach White told the Atlanta Journal Constitution. “It doesn’t surprise me that he came in and made those plays in the game. He’s a big-game player and it really helped us.” The run led to Pace’s first lead which allowed the players go into one of their signature zone defenses, completely shutting down Jefferson. Pace held Jefferson to only eight points in the third quarter and managed to end the quarter with a one-point lead, 29-28.

Pace grew their lead in the fourth quarter, ending with a final score of 48-35. “That was the best feeling in the world and a day I will never forget,” said Middleton. The whole Place community celebrated the team and their coaches at morning assembly on March 9, the Monday after the game. The state championship was the first for the boys basketball team since the 2016 and 2017 seasons, when the Knights won back-to-back titles for the first time in the program’s history.

The team returns all five starters as well as their sixth man next year, meaning high expectations for next season. The hunger in the players for another championship is real, as the Knights were already practicing four days after winning the state title.