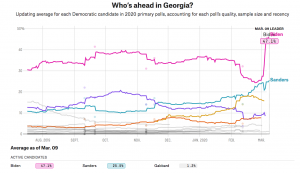 After an exciting few months of debates, campaigning, caucuses and primaries, Georgia voters will finally be able to take part in the Democratic race for a presidential nominee on March 24. For many Pace seniors, this primary will be their first opportunity to vote, and some seniors led registration initiatives on campus in hopes of getting a greater number of young people to the polls.

Historically, former President Barack Obama won the primary in 2008 and Hillary Clinton took the state in 2016. Thus, Georgia’s primary is a fairly good indicator of who is likely to take the nomination.

This year, early predictions from FiveThirtyEight claimed that Vermont Senator Bernie Sanders would win the state and take over 30% of the vote in the process. His early success in New Hampshire and Nevada, as well as his close race in Iowa caused the likelihood of his victory in Georgia to increase since the New Year, when he was projected to receive only 20% of the vote. The weekend of Feb. 22, when Sanders ran away with the victory in Nevada, his forecasted share of the vote jumped nearly four points.

However, after the South Carolina primary on Feb. 29, Biden’s campaign gained plenty of momentum as he surged back into the lead. On March 1, FiveThirtyEight’s predictions were wildly different than they had been earlier in the week, then claiming that Biden was forecasted to win around 36% of the vote in Georgia and that the vast majority of simulations showed that he could win up to 56% of the vote.

This was a major change from even a few days before, when the site claimed that Sanders could potentially take more than 60% of the vote.

Then came Super Tuesday on March 3, where Biden did surprisingly well, winning 10 out of the 15 primaries, sweeping the South with wins in Alabama, North Carolina, Tennessee, Texas and Virginia, and picking up wins in Arkansas, Oklahoma, Maine, Massachusetts and Minnesota as well. Sanders, on the other hand, won just three states outright: Colorado, Utah and Vermont, and is on track to pick up California as of March 6.

Now, with Michael Bloomberg out of the race and endorsing Biden, Biden’s momentum is likely to continue.

In terms of delegates, Biden currently has 637 pledged delegates to Sanders’ 559, with 1,191 delegates needed to win the nomination outright. In the Georgia primary, the state’s system of distributing delegates is split into two parts: the statewide vote and the vote from each congressional district.

As of March 6, FiveThirtyEight has Biden as the top vote getter in the Georgia primary with 40.3% of the vote compared with Sanders’ 21.5%. The only other candidate in the race as of now is Tulsi Gabbard, who is predicted to win a mere 1% of votes cast by Georgians.

Sanders’ rise has been met with some skepticism by many major media outlets that tend to run liberal, especially after the Iowa caucus and New Hampshire primary; however, his landslide win in Nevada was indisputable and really marked his position as a vote getter across all demographics, even including moderates and conservatives that voted in the primaries.

Nonetheless, nationally, FiveThirtyEight has now put the odds of Biden winning the Democratic nomination outright, by earning more than half of pledged delegates, at 88%.