New Pace Athletes Make a Mark on Their Teams 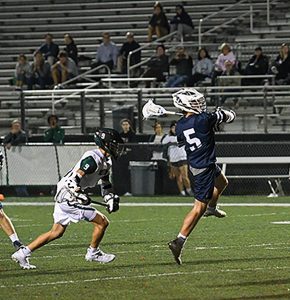 Every year, the Upper School greets new students who become part of the community. These students come in prepared to take on new challenges, in the classroom and in other areas of student life. Many times, the students also bring with them athletic skills that help to benefit their new teams.

This year, the Upper School welcomed freshmen Caitlyn Pinsker and Niko Karetsos and sophomore RJ Austin, and these students have already made an impact on their respective sports: tennis, lacrosse and baseball.

As a freshman new to Pace, CAITLYN PINSKER stepped into the No. 1 singles position on the varsity girls tennis team. “Caitlyn is really consistent and fights for everything during her matches,” said junior Sidney Funston and Pinsker’s teammate. “She is really positive and is a good influence on the team because of her work ethic.”

Pinsker came to Pace from The Davis Academy in Sandy Springs. When she was seven years old and living in New York, she began playing tennis in her free time. According to Pinsker, other sports were not really working for her, so she decided to try out something new.

“I didn’t really feel very athletic and I was not good at any other sports when I started,” said Pinsker. “However, I basically started working really hard to get good at tennis. It took me about two years of training and practicing to get to a place where I felt confident. It is really cool to see how far I have come and see how I have grown as a tennis player and athlete.”

“Caitlyn is very consistent and thoughtful and always positive on the court,” said head coach Matthew Marsico. “She loves the game and is continuing to work hard at improving.”

Pinsker also competes independently through the United States Tennis Association (USTA). She has traveled to matches in Florida, North Carolina, Tennessee and Alabama. “On the weekends, I often go to tournaments and sometimes they are farther away which I like because I am able to meet new people,” said Pinsker. “Being able to make new friends is my favorite part about tennis.”

As the lacrosse team took the field this year the players were excited to embrace freshman NIKO KARETSOS. “We had been waiting since he came to Pace to get him on the varsity,” said junior defenseman Tripp Trimble. Karetsos is an attackman who has been playing lacrosse most of his life. “I have been playing lacrosse since before I can remember and my whole family plays lacrosse,” he said.

His brother, junior Evan Karetsos, has been a member of the varsity team for the past two seasons and his younger brother, Alex Karetsos, plays for the lower school Pace team as a fourth grader. Niko proved himself last year as a captain and leading scorer for the middle school team.

Niko also plays on a travel team, Thunder LB3, that travels across the country and allows him to gain experience playing strong competition. Karetsos has also improved his skills by working with coaches Shayne Jackson and Bryan Cole in private lessons. Jackson and Cole are professional lacrosse players for the Georgia Swarm and Atlanta Blaze, so they have a lot of knowledge of the game that has helped Karetsos grow as a player.

Karetsos began the season scoring six goals against Kennesaw Mountain High School in his first ever start. “We all expected him to play well, but we were shocked he scored six goals,” said Trimble. Karetsos did not waver in the next game against Woodstock High School, scoring five goals.

“He has handled the pressure of being a new player seamlessly at this point,” said assistant coach Ben Ewing. “He sees the field well and can move the ball quickly without telegraphing passes.” With Niko playing as the X attackman for Pace, he is able to open the field of other players and distribute feeds.

The season, however, is just beginning and there are many more games to play. “I am excited to see the season progress and play in bigger games like Lovett and Westminster,’’ said Karetsos.

After last year’s heartbreaking loss in the state championship, this year’s version of varsity baseball is looking to defend their region crown as well as avenge their championship loss. A big piece in their ability to do so is sophomore RJ AUSTIN, who is new to Pace this year. He has already impressed both coaches and teammates with his play as well as caught the attention of college scouts nationwide.

“Since I was young, I have always loved baseball, and from that love came a lot of work to get better because I want to play for as long as possible,” he said. He spends almost every day doing baseball related things, whether it be lifting weights, practice or actually playing.

Austin is reaping the benefits from this non-stop grind mentality already. He currently has offers from Tennessee, Oregon, and Cal as well as interest from Georgia Tech, Wake Forest, Florida State, Vanderbilt, Miami of Ohio and South Carolina. These opportunities are very rare, only offered to the most elite players, but only truly special players get Power-5 offers to play baseball at such a young age.

Because baseball is driven largely by metrics, with athletes who desire to play at a high level needing to meet various benchmarks in things such as fastball velocity or exit velocity off the bat, it shows just how hard Austin has worked on his craft to be seeing payoffs already.

As a pitcher, Austin plays perhaps the most important position for this year’s varsity team. “With losing a talented class of seniors, for him to come in and be able to pitch at such a high level, play superior infield, and be a solid bat in the middle of the order is huge for our team this year,”  said Coach Seth LaFera. His talent as a pitcher is evident, throwing his fastballs around 90 miles per hour, with great complementary pitches to keep hitters on their toes.

Scouts have begun to take notice, with Perfect Game (the top baseball scouting service) featuring a dialogue with him about pitching on their Instagram. His skill has been on display through two outings this season, pitching deep into both games and effectively shutting down some high powered teams.

“I have very much enjoyed Pace so far, especially the team,” said Austin. “I was nervous coming in to make new friends and meet new teammates, but we have come together very well and I am very grateful for them welcoming me in as a new kid on varsity.”

As the season heats up, and the rest of the team prepares for what they hope will be a deep playoff run, Austin cannot help but look forward: “I cannot wait to pitch in big rivalry games like Westminster and Lovett and hopefully a lot of state playoff games.”