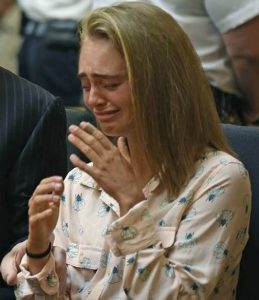 HBO’s 2019 documentary “I Love You, Now Die: The Commonwealth v. Michelle Carter” is about a young woman, Michelle Carter, who went on trial in 2017 for encouraging her long distance boyfriend, Conrad Roy, to take his own life. The documentary has attracted a vast range of audiences for its depicted ethical dilemmas and traumatic encounters from both sides of the trial.

The film raises legal and moral questions including, “Can you be found guilty for encouraging someone to kill themselves?” At the time, 17-year-old Carter had mutual love for 18-year-old Roy; however, their relationship was rather complicated, as seen through the hundreds of text messages sent between the two.

Director Erin Lee Carr displays every hidden truth of the twisted case while breaking the documentary up into two parts: The Prosecution and The Defense. This must-watch series brings out the darkest questions about the justice system and forces the viewer to take a stance on what is immoral versus what is against the law.

Part 1, The Prosecution, begins with how the couple first fell in love in Florida while on a vacation. Their unconditional love was immense, but oddly enough Carter and Roy only met in person about five times. The complicated relationship took place largely in the virtual world through constant text messaging and phone calls. Roy had suffered from social anxiety and depression, and had attempted to take his own life many times, although ultimately seeking rescue each time.

Both families were aware that the two teens talked but were uncertain of the scale of the relationship. It wasn’t until July 2014 when Roy was found unconscious in his Ford F-250 truck parked alongside a carbon monoxide tank in Fairhaven, Massachusetts that the truth broke. The seemingly loving, caring and loyal girlfriend had encouraged her boyfriend to take his own life.

Why would such a devoted girlfriend who sought constant approval from her man, drive him to his own death? Was she longing for attention and sympathy? Is she truly cynical or mentally unbalanced? The questions will be sure to keep you guessing whether or not Michelle Carter committed an illegal action or an unethical choice. “Are you gonna do it now?” “You keep over thinking it… just do it like you said,” are just two of the hundreds of shocking texts sent between Carter and Roy.

Part 2, The Defense, explains Carter’s delusional upbringing of isolation and mental instability. A story that seems like a typical high school girl in love with her boyfriend expands once we witness her classmates’ views. Carter had longed to fit in with the popular girls but struggled to maintain healthy friendships and sought attention from Roy.

Hooked on antidepressants from a young age, she admitted to having low self esteem and insecurity issues. “People [from school] tell me they love me and they’d wanna hangout but they never make an effort to,” she wrote in one message to Conrad. “So I always think ‘why am I not good enough.'”

The documentary’s climax was set on the night of Roy’s death. His parents were worried, yet Carter was relaxed for she knew where he was. She knew his intention that night – to sit in his truck in a Kmart parking lot and suffocate to death. Just days before, she sent him messages implying she wanted him to take his life, and his responses seemed in agreement.

According to the text messages between the two, he had planned exactly how and where his suicide attempt would take place. He was eager and excited to get it done and as a loyal girlfriend, Carter was only trying to support him. The night of his death, Roy got cold feet, frightened to leave this Earth. The documentary’s most compelling moment however, comes when Roy exits the vehicle and calls Carter.

The twisted fairy tale fantasy love story of two teenagers who hardly saw one another in person yet are bound to each other through instant messaging, is beyond a realistic world. Watching the documentary, you’d think this story was almost made up, for nobody would encourage another person to commit suicide. Yet Carter did.

As Roy rethought his decision, he began to step out of the truck with Carter on the phone. Here, though, is the pivotal moment of the entire documentary, the moment that swayed the judge’s decision. She instructs Roy to get back inside the car… and kill himself. Mentally unstable, psychotic and evidently pure evil, Carter told her longtime boyfriend to return to the truck and breathe in the carbon monoxide. The compelling documentary hits its target at that moment.

Carter was convicted of involuntary manslaughter as the jury found enough to charge her with “wantonly and recklessly” assisting in Roy’s suicide. Watch this documentary to formulate your own opinions of whether or not Carter received a fair verdict. Was the decision unjust or fitting?

There is no argument that what she did was completely inhumane and horrid, but people differ on her punishment. The documentary truly outlines the opposing views of legality versus morality. Watch “I Love You, Now Die: The Commonwealth v. Michelle Carter” on HBO now.