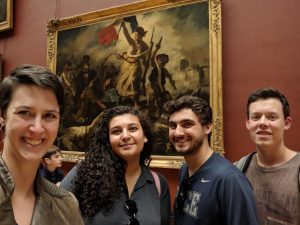 Sitting in the hotel lobby on the recent college trip to the Carolinas, future Class of 2024 Dean Caitlin Terry cheers for the University of Virginia’s basketball team as her alma mater defeats the University of North Carolina at Chapel Hill. Between cheers, Mrs. Terry reflected on her experiences that allowed her to take on this new role beginning next school year.

Before coming to Pace in 2015, Mrs. Terry taught at the Community High School of Arts and Academics in Roanoke, Virginia. There, she taught history, a class on Ancient Rome, a class on revolutions, French I and French III, while simultaneously handling all of the school’s communications and helping with physical education.

Mrs. Terry only taught at this school for one year. What drew her to Pace was the opportunity to connect with her students on a deeper level. “I was excited to come to Pace especially because of the student-teacher relationships, and because it was a school that I could probably end up seeing myself for a long time,” said Mrs. Terry.

“Being able to teach an extra class, so teaching six in the fall both last year and this year, allowed me to throw myself into teaching,” said Mrs. Terry. As a dean, she will only be allowed to teach three classes which is a big shift for her. “I love teaching in the classroom, so this is going to be a change for me, stepping away from something that I love doing.”

Mrs. Terry plans to use her acquired knowledge in order to be an effective dean. “I have to be thoughtful about the student-teacher relationships, and how I can both serve the school and the student body, and also have a new challenge for myself.”

Deans have the special opportunity to advise their class for all four years, which is something Mrs. Terry is looking forward to. “Even though [the role] does mean a reduction in terms of the teaching load, it will offer an opportunity to be able to work with students for an extended period of time.” While she has chaperoned drama trips, college trips, ICGL trips and coached soccer, Mrs. Terry hopes that being a dean will offer even more opportunity to get to know students outside of the classroom setting.

One of Mrs. Terry’s favorite things about Pace is that she can interact with her students in a small, intimate setting. “I love having one-on-one conversations or small group conversations and not just standing up and lecturing to the classroom without connecting with people,” said Mrs. Terry.

Outside of the classroom, Mrs. Terry enjoys cooking, baking, reading, going on long walks, kickboxing and indoor rock-climbing. She also loves to travel with her husband John Terry who teaches at Westminster. “We love to go to quiet, serene places, eat good food and see museums and old churches,” she said.

As a dean, Mrs. Terry wants to not only guide her students, but also hopes to push them to develop their own skills in the environment around them. “I want to point them in the right direction, help them make connections, develop their own networks, be there to listen and be supportive, encourage growth, but also be there to challenge them to make Pace an even better place than it already is,” said Mrs. Terry.

Mrs. Terry wants the incoming class of 2024 to be “open minded, curious and ready to be challenged,” but to also remember that “we are all part of a community for a reason, so no one is going to be facing a challenge alone.”