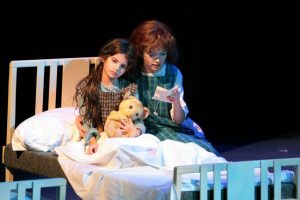 (L-R) Nikki Rubin, a second grader at the time, and Caillin Cooke ’15 perform in the Pace Upper School’s production of “Annie” in November 2010. Photo: Caitlin Jones

Knightly News: Hi Nikki! How are you doing today?

KN: Of course. So, how has this school year gone so far?

NR: It’s going great. I really like that as seniors we were able to pick our classes and create our own schedule.

KN: On that note, what is your favorite class you are taking?

NR: I like [AP] Music Theory a lot, but it’s really hard. But also, I really like [AP Language and Composition] with Mrs. Washburn this year.

KN: What has your favorite memory of senior year been so far?

NR: That’s a big question. Hmm, well, call me cheesy, but I really like Spirit Week.

KN: Which year of Spirit Week has been the best?

NR: Definitely this year. Sleeping over at Pace has been something I had looked forward to for so long, and it was so much fun. I was literally sick the whole week, but it was awesome.

NR: It’s weird because on the one hand, I have been here my whole life, but I am excited to learn new things. I mean, I am nervous to make new friends but it should be cool to find a new home.

KN: So, what are your hobbies?

NR: Singing, lacrosse… I mean that pretty much sums me up as a person. I’ve also recently started trying to write more music, but that’s been difficult, and it’s a long process.

KN: In regards to singing, when did you begin? At what age?

NR: So, I actually started singing in, like, second grade when I did the show, “Annie”(at Pace). I had actually never sung before that. My sister (Lexi Rubin ’16) was involved in that show, and then the director asked me to be part of it. I do not think I would have gotten into theater if it were not for that. Also, another cool theater experience was when I was in sixth grade and got to fly in “Peter Pan.”

KN: That’s so cool! Do you have memories from when you were little and starting to perform?

NR: Yeah, I actually recently found a video of me in pre-first that my sister took when she was trying to start a YouTube channel. I was singing in the background, and it actually sounded like a dying animal. It was so bad. “Party in the U.S.A.” by Miley Cyrus (giggles).

KN: That’s great. How do you think you have grown as a singer and why?

NR: Well, I would probably say that my older sister has influenced me. When she was five years old, she would walk around the house singing “Phantom of the Opera.” Being around that was really helpful and inspirational.

KN: Who would you say is your favorite artist at the moment? Or what song are you really vibing with right now?

NR: Well, right now, I really like Benee and her song “Glitter.” She is like 20 years old. It’s insane how young she is.

KN: I love that song! What are your goals with singing in the future?

NR: Right now, my voice teacher wants me to start recording music, so I might do that, but it’s expensive, so I don’t know. I might try and wait longer until I am sure about what I want to record. Also, I have applied to some music schools, and I’m waiting to hear back from them. I also have my UGA audition for singing in the springtime, so that is nerve racking, but exciting.

KN: What is your most memorable singing or theater experience?

NR: I would probably say my freshman year when I did Battle of the Bands. We changed names, but first we were called “Freezing Fire,” then “Streetwise.” However, we are not really existent at the moment. But on the important note, it was just such a fun performance. The energy of the crowd was literally insane. Sometimes when you are on stage, you can kind of tell that people are not super into it and they don’t want to be there, but the people at this performance were really into it, and we were able to feed off their energy.

KN: What are all of the shows you have been in, besides “Annie” and “Peter Pan”?

NR: I did middle school shows, but since I’ve been in high school, the first show I did was “Thoroughly Modern Milly,” which was a dance-heavy show, so that was cool because I like dancing but I am not the best at it. Then, “Joseph and the Amazing Technicolor Dreamcoat.” Last year, “Beauty and the Beast.” And this year, we are working on “The Music Man.”

KN: Wow, that must have been so exciting! OK, let’s do some fast facts now! If you were on a desert island, what is one thing you would need to live with?

NR: I would say a pot. It’d be handy, so that I could make clean water and not die.

KN: That’s really smart. What is your favorite food?

KN: What event are you most excited for, for the rest of the semester?

NR: Senior spring break in Jamaica! I literally have a countdown on my phone.

KN: Awesome! Well, that’s pretty much everything. Thank you so much for talking today.