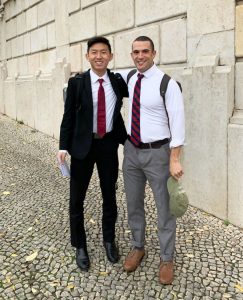 Junior Michael Fu began to study nonconformity in eighth grade after reading Adam Grant’s “Originals: How Non-Conformists Move the World.” Fu was impassioned by Grant’s discussion on originality’s contrast to conformity and appreciated the book’s overarching theme of going against the grain. Upon Fu’s enrollment at Pace in Fall 2019, he knew he wanted to share this idea with his new school community… But how?

“While at a chess tournament in middle school, one of my friends, who was in high school at the time, explained to me the TEDx conference he was hosting and previously hosted at his high school,” said Fu. “He described how wonderful of an experience it was, not only as a learning experience for himself, but more importantly, how impactful he thought the conference was on the community in sparking conversation and inspiring his peers.”

According to the organization’s website, TED is a global community of people from every discipline and culture who seek a deeper understanding of the world around them. Originally a one-time conference about technology and design in 1984, TED grew into a viral video phenomenon and prominent cosmopolitan community. Each year, TED thinkers congregate around the world to create, explore and communicate their motto: ideas worth spreading.

In 2009, the rapidly expanding TED community sought a way to spread ideas to smaller communities around the world. Thus, they created the TEDx program. A TEDx event is a local gathering where live TED talks and performances are presented to a smaller community. They are independently organized by people within that community and are subject to their own rules and regulations. Yet, the mission and purpose still holds the same weight.

On March 21, Fu will bring the first ever TEDx conference to Pace Academy to discuss ideas on nonconformity. The theme for this inaugural TEDx event is Challenging the Status Quo. “My goals for hosting this TEDx conference are for our community to gain new trains of thought and to spark meaningful debate about meaningful topics, in this case challenging the status quo for the betterment of society,” said Fu. The event will be held from 4-6 p.m. in the Fine Arts Center.

All of the student speeches will correspond to nonconformity. Brown’s talk, for example, will center around minorities. “Challenging the status quo is about not being afraid to face the judgmental gaze of normalcy,” said Brown. “I think anybody who has the courage to be themselves challenges the status quo every day.”

The event in March will conclude with a presentation from guest speaker Carlos Andrés Gómez. He is a Colombian American poet, speaker, actor and writer from New York City. “His poetry wrestles with masculinity and his Latino identity through raw and ineffably beautiful language,” wrote Mr. Kaufman.

“Throughout history, we as humans have advanced due to individuals who had/have the courage to challenge the status quo and do things differently,” said Fu. If the content of the event isn’t powerful enough to persuade every single person in the Pace community to attend the event, some teachers will be offering extra credit to students who choose to participate.