Historian to Speak in April on Atticus Finch 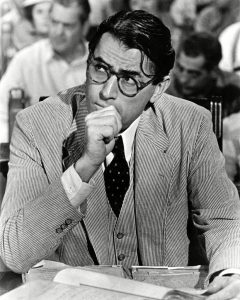 Actor Gregory Peck as Atticus Finch in the movie production of “To Kill a Mockingbird”. Photo: Wikipedia

Pace upper school students will experience a departure from the usual Wednesday morning assembly when historian Joe Crespino comes to speak on April 15. He was invited to Pace by history teacher Christine Carter, who met him while she was getting her Ph.D. at Emory University where Mr. Crespino was teaching.

In advance of his visit, here is some background information on Mr. Crespino and the book he will be presenting, “Atticus Finch: The Biography – Harper Lee, Her Father, and the Making of an American Icon.”

In former president Barack Obama’s farewell speech he mentions that in a diversifying nation, the people must follow the words of Atticus Finch, “You never really understand a person until you consider things from his point of view… until you climb into his skin and walk around in it.”

With this, he’s asking for the nation to have empathy for others, the empathy that Atticus Finch taught to Scout in Harper Lee’s beloved novel “To Kill a Mockingbird.”

Seemingly, Atticus is the epitome of virtue: saving an innocent black man from being lynched by a mob, and voted by the American Film Institute “the greatest hero in American film.” However, in his book “Atticus Finch: The Biography – Harper Lee, Her Father, and the Making of an American Icon,” Crespino questions which Atticus is the virtuous, heroic, symbol of morality depicted in “To Kill a Mockingbird.”

After the 2015 posthumous publication of Lee’s other novel, “To Set A Watchman,” people began to question who the real Atticus Finch was. In “To Set A Watchman,” Scout, or Jean Louise, returns to Alabama after living in New York for college. Atticus, as described by Crespino, is every bit what you would expect in a white man living in Alabama in the 1930s and 40s.

He attends white supremacist meetings and goes against the NAACP, the National Association for the Advancement of Colored People. As Crespino says, he is “racist, reactionary and despicable.”

Although these revelations were shocking to most readers, Crespino was looking for something deeper in the character of Atticus Finch. He isn’t a literary critic or editor – he’s a historian. He holds the title of Jimmy Carter Professor of History at Emory University and is an expert in the political and cultural history of the 20th-century United States and in the American South since Reconstruction.

Crespino has published three books, co-edited a collection of essays, and has written for academic journals and forums like the New York Times. Historians like him study change over time.

The question wasn’t who the “real” Atticus Finch was, but what were his origins, what caused this change in his portrayal, and what did this indicate about the political climate in the South at this time. In short, how does one understand the transformation of Atticus Finch?

Crespino began by looking into Harper Lee’s life. He discovered that the character of Atticus Finch in both “To Kill a Mockingbird” and “To Set a Watchman” was based on her father, Amasa Coleman Lee.

Like Atticus, Mr. Lee was a lawyer, but also owned and was editor of a newspaper. Harper Lee seemed conflicted in how to portray Atticus. Her father was a right-wing reactionary and racial paternalist, but didn’t support lynching, demagoguery or mob rule.

He belonged to a more intellectual group in the South of white conservative men who believed that they could make the South change in a peaceful and orderly manner.

Crespino was able to take newspaper articles from Amasa Lee and Harper Lee and piece together arguments they would have had, in a way where one could practically imagine the conversations they had around the dinner table. Crespino explains that in both her novels, Lee is trying to make sense of her fathers’ political beliefs in a period rife with the rise of right-wing reactionaries and militancy.

In “Atticus Finch” Crespino analyzes the political message of both novels through the elaborate character, Atticus Finch. Harper Lee rejects the racial paternalist Atticus in “To Set A Watchman,” but defends him in “To Kill a Mockingbird” after the rise of the Ku Klux Klan. Crespino says that Lee was trying to impress on the North that there were good people in the South that would bring change slowly; however, the Klan was radicalizing these organizations.

In the end, Harper Lee had two different objectives in each book, making it so that there was no true Atticus Finch. Rather, the portrayal of both Atticus Finches reflect the duality of Lee’s feelings towards her father, as well as the political climate in the South in that time period.