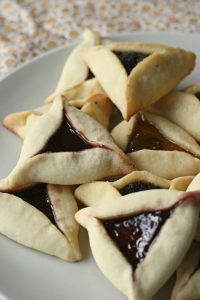 Most students know about the Jewish holidays Hanukkah or Passover, but few have ever heard of Purim. “If you said ‘Purim,’ I don’t think most people would have any idea what it is,” said junior Eve Kogon.

Occurring during the Hebrew month of Adar, which usually corresponds with March, Purim celebrates the story of Esther, who helped save the Jewish people from persecution. This year Purim begins the evening of March 9 and ends the evening of March 10. Purim is often referred to as the “Jewish Halloween” for its elaborate costumes and festive foods. The story is read from Megillat Esther, or “the Scroll of Esther,” a Hebrew scroll that is separate from the Torah.

The story is set in Shushan, the capital of the Persian Empire, and it begins with the king’s evil advisor named Haman who wants everyone to bow down to him. A Jewish man named Mordecai refuses to bow, so Haman vows to destroy all the Jews. He convinces King Achashverosh, the king of Persia, to send out an order to kill all the Jews on the 14 of Adar. Haman constructs a special gallows to hang Mordecai on the upcoming persecution date.

After King Achashverosh’s wife Vashti is banished for refusing to attend one of his parties to show off her beauty, the king brings in women from across the empire to choose a new wife. Mordecai asks his cousin Esther to go and see if she can become the new queen in order to stop Haman from killing all the Jews. After seeing all the women, King Achashverosh chooses Esther.

Mordecai convinced Esther to go ask the king to spare the Jewish people despite the potential dangers this imposed on Esther: going to see the king without being summoned was an executable offense. In preparation, Esther and all the Jews of Shushan fasted for three days. This is annually commemorated with the Fast of Esther, a three day fast prior to Purim to remember the courageous efforts of Esther.

Esther goes to see King Achashverosh, and fortunately, he is pleased to see her. She tells him of the evil plan of Haman, and Achashverosh, out of his love for Esther, agrees to save the Jews. However, it was not within Achashverosh’s powers to rescind his previous declaration that ordered the execution of all the Jews, so instead, he issued another decree that granted the Jewish people permission to defend themselves against attackers. The Jewish people ended up killing over 70,000 of their enemies.

As for Haman, he and his 10 sons were all hung on the gallows Haman had originally built for Mordecai. Achashverosh then appointed Mordecai to Haman’s newly vacant position.

Purim has many traditions associated with it. When reading the story from Megillat Esther, whenever the name “Haman” is read, the reader pauses while the audience screams, boos and creates a racket using noisemakers called groggers. It is also customary to eat three-sided jelly or chocolate-filled cookies called hamantaschen which are meant to symbolize Haman’s infamous hat.

Freshman Ella Berman thinks it is important for other Pace students to learn about Purim because “learning about other cultures helps one’s ability to interact with other people who may not be of the same denomination or ethnicity.” Math teacher Kimberly Goodstadt agrees, saying, “Now that we have created all these affinity groups for all of the diversity that we have, we should educate people in all aspects including religious holidays.”

Beyond learning the basics about other cultures, there can be interesting connections within these stories that can be tied back to information learned in the classroom. For example, King Achashverosh is presumed to be King Xerxes of Persia, something most Pace students will remember from their freshman year ancient civilization history classes.

“Purim is a story of survival through natural means, not divine intervention,” said Rabbi David Silverman of the Atlanta Scholars Kollel. “The Jewish people will always come out standing on their feet. We should appreciate it, we should understand it and we should respect it.”