Girls Varsity Basketball Finishes Season in First Round of Playoffs 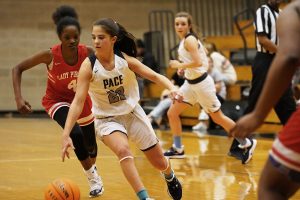 The girls basketball team finished their season in the first round of the state playoffs against No. 1 seed North Hall High School in Gainesville on Valentine’s Day. It was a nail-biting ending to a strong season, with a final score of 46-59. The team’s record for 2019-2010 was 14-16.

Coming off a successful season with the loss of several talented players, including two who are playing at the college level, the Pace varsity girls’ basketball team had some big shoes to fill this year. Ann Rafeedie ’19 plays basketball for Denison University and Joelle Zelony ’19 is a Tufts University basketball player. Seniors Virginia Hobbs and Jordan Upchurch stepped up as captains as the team welcomed four new sophomores.

Having a fairly inexperienced team means going back to the basics at times. “We work hard at practice every single day,” said Director of Athletics and head girls basketball coach Dr. Troy Baker earlier in the season. “The learning curve is steep, but that means our growth rate is faster than others.” As the regular season progressed, the team mastered the basics and won two big rival games against Lovett and Cedar Grove.

Stepping onto the varsity court for the first time this year were sophomores Megan Hardesty, Gabby Hudson, Dylan Baker and Julia Holmes. “As longtime soccer players, Dylan and Megan have been able to translate their knowledge of defense and press onto the basketball court, giving us a huge defensive boost,” said Coach Baker. “Julia and Gabby work hard every day and you can really see them improve.”

The sophomores were not the only ones who worked hard. Upchurch beat Pace’s 3-point shooting record of 82 in one season, with 113 3-pointers. She also received the Co-Player of the Year award for 3A-Region 5.

While Hobbs’ season was cut short by an ACL injury, her versatility across the court allowed more playing time and improvement for younger players throughout the season. Fellow senior Taylor Doucet suffered a broken nose on Senior Night, but decided to opt out of surgery to finish out the season.

However, talent was not even the team’s greatest asset. “Unlike previous seasons, our greatest strength was chemistry,” said sophomore Margo Kaye. “Obviously games and practices are fun, but the best times we had were on road trips, after late practices and when we just hung out.” The team enjoyed getting dinner together after games and practices. “We got business done on the court, but we had so much fun with each other and the coaches,” said Hobbs.

The combination of an inexperienced team and a challenging schedule gave way to some disappointing losses, though. “High fives have always been a big thing for our team,” said Kaye. “When one of us made a mistake, the rest of the players on the court were always there to bring you back up.” Despite tough losses to schools like Westminster, Marist and Woodward the team never gave up. “We kept working hard and doing what we know best, which is to play basketball,” said Hobbs.