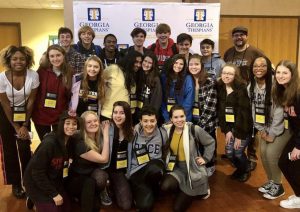 Each year, over 5,000 thespians from high schools all over Georgia come together for ThesCon, a conference held in Columbus, Georgia every February. This year, 23 Pace students attended the conference from Feb. 6-8 where they participated in workshops led by theatre professionals and watched productions from high schools across Georgia. Students competed with each other to secure awards such as Critics Choice for Acting.

This conference is not only about competition, though, as students are able to learn how they can improve from watching other schools’ productions. “I really liked how we got to see shows from all different schools because it’s just really cool to see how they use the stage and play different roles,” said junior Olivia Ullman. “It gives us ideas about what we might want to do in the future.”

When a scene is performed at ThesCon, the judges and all other students registered for the conference are allowed to watch the scene. Pace students attended all scenes performed by other Pace thespians and went to a few scenes performed by other schools to understand the judging criteria. “Everyone has to wear all black in these short five minute performances because you’re not supposed to demonstrate any character in your outfit,” said sophomore Lauren Smith. “The character has to come all from the acting.”

For each scene at ThesCon, three judges watch and score the scene, the highest score being a “superior.” If all three judges score the scene as superior then the students participating receive an overall superior award and in turn qualify for Nationals. The only other type of award that students can receive at the end of ThesCon is showcase superior, which means the student is recognized onstage in front of everyone at the conference.

Pace students performed a group musical scene, which is generally singing and dancing without speaking, from the musical “Little Shop of Horrors” called “Skid Row.” A few of these students also participated in a solely acting scene called “American Sun.” The last acting scene that was performed, called “Enter Laughing,” received an overall superior award for all students who participated. “We got to perform our scene onstage at the showcase because we got superior and were rated in the top 10 in individual events which was very exciting,” said Ullman.

Spending time with other high school thespians is a large part of the conference. “Meeting other theatre kids is definitely one of the high points of ThesCon because it’s just so fun being able to become friends with all of these new people who are interested in the same things as us,” said Smith. Senior Jackson Gray felt the same way following the trip. “ThesCon’s great because it gives us a chance to interact with other theatre groups outside of Pace and it’s fun to take in a different style of theatre than what we’re used to,” he said.

Workshops allow students to learn from professionals in the field and improve their skills. Due to the weather at ThesCon this year, though, many workshops ended up being canceled for their first night because the instructors were not able to come. “It was raining pretty much every day which meant that a lot of workshops were canceled the first night and were packed the second night,” said Smith. “Overcrowding definitely made the workshops less fun because we didn’t have a chance to talk to the teachers afterwards.” Junior Jack Carson, nevertheless, enjoyed the workshops that he attended. “I love how you get to go around to do workshops and learn things you wouldn’t otherwise learn,” he said.