Why We Celebrate Love on Feb. 14 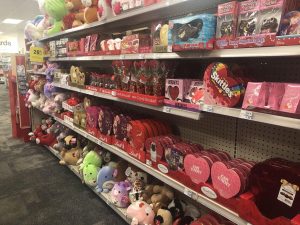 Every year on Feb. 14, countries in many parts of the world celebrate Valentine’s Day, a day in which people in the United States share candy, cards and flowers with their loved ones. The holiday has turned into one in which many people use money to express their love and believe that all of their wrongdoing can disappear with a box of dark chocolate truffles.

People watch rom-com movies on the Hallmark Channel and can think that on-screen romances are true and realistic. However, most people observe Valentine’s Day without taking a moment to recognize the significance and history of the day.

Valentine’s Day is all in the name of St. Valentine, a Catholic patron saint. This saint is shrouded in mystery, as the Catholic Church recognizes several St. Valentines. There are many differing legends regarding the patron, one of which claims that Valentine was a third-century Roman priest. He was known for defying Claudius II’s orders to outlaw marriage for young men by continuing to surreptitiously wed young couples. After being caught breaking the law, Valentine faced the wrath of Claudius II and was executed.

Another story claims that Valentine actually was an imprisoned man who helped fellow Christians escape the brutal Roman prisons where people were often tortured. He supposedly sent the first Valentine’s “love letter” to a young girl for whom he had fallen. According to history.com, this Valentine signed his notes with “from your Valentine,” a phrase still commonly used today. After being caught, he was murdered and became a martyr. Although the stories may not be clear, they all feature a hero known for his empathy and romanticism.

In regard to the date of Valentine’s Day, some believe that it is in February as it marks the death of one of the Roman patron saints, which possibly occurred in 270 C.E. Others claim that the Christian church placed this holiday in the middle of February to Christianize a pagan festival known as Lupercalia. Lupercalia, which took place around Feb. 15., was the celebration of the coming of spring, and during this festival, pagans focused on fertility.

Roman women placed their names in an urn in another ritual, and the men would draw from it to find a new lover, often resulting in marriage. But the first person to write of Valentine’s Day as a specifically romantic day was the English poet Geoffrey Chaucer in a 1375 poem.

When people think of Valentine’s Day nowadays, thoughts commonly turn to the cards that are sent to loved ones. The first commercial Valentine’s Day cards printed in the United States were towards the middle of the 1800s. Cupid, the Roman god of love and attraction, then became associated with the holiday. As February is the prime season for bird mating, birds also became associated with the day.

Valentine’s Day, although not a public holiday in the United States, is ingrained in American culture today. Many people from Great Britain, Canada, Australia, Argentina, France and Mexico also share love and affections on this day.