The Pawfect Playlist for You and Your Pet 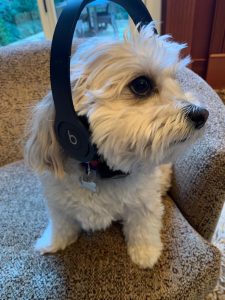 Bertha Wagreich listens to her very own playlist. Here, she jams out to the song “Classic” by MKTO. Photo: Sloane Wagreich

Music is a prominent component in humans’ day-to-day lives. According to marketingcharts.com, on average, each person will spend around 30 hours each week listening to music in the car, at school and work or on airplanes. But humans are not the only ones who listen to music. Dogs can sense music and react to the different rhythms and tones of songs. As stated by WagWalking, dogs’ sense of hearing, which is far more powerful than a human’s, can pick up on 50,000 sound waves per minute.

It may seem silly to think that the type of music a dog hears can affect their behavior, but at the very least, it impacts their body language. Loud, heavy metal rock music will likely rile dogs up and make them really excited. Upbeat pop music will make them wag their tails. Slow, mellow music can make them sleepy or maybe even sad. Sound familiar? It should because all of these genres of music have similar effects on humans’ moods.

According to Psychology Today, dogs are able to sense a song’s pitch. For example, dogs will howl at high pitched music, as they respond best to high notes. Although they cannot understand the lyrics of songs, the tone and melody have a significant effect on dogs’ moods. Dogs, like humans, respond best to music that has a similar tone and beat to that of a heart. While there are cases where dogs like and respond well to music, dogs will also hint to their owners when they dislike songs as well. Dogs will paw at their owner or try to cover their ears if they want the music to change.

The idea of music catered towards dogs is not a new one. According to the American Kennel Club, Laurie Anderson, a famous American singer and songwriter, hosted a “dog concert” in Australia in 2010. Afterward, she went on to hold a similar concert at Times Square in New York City. At this concert, people had to wear headphones because the songs were so high-pitched.

It’s not just dogs who react to music, though. According to PBS, cats respond to music by purring or pawing at their owners; however, scientists have observed that these animals do not favor human music. Their most preferred genre of music is classical.

Iguanas are sensitive to high-pitched sounds and loud music. Lower sounds tend to soothe them and make them less tense. Birds have a very similar response to music as humans do. They will sing and even dance when they hear a specific melody, feeling a connection to it like humans. Certain high-pitched notes in songs sound like other bird calls, prompting birds to sing in response. According to the New York Times, their brains respond to songs in the same parts as do humans. Owners of hamsters can play music for their pets to calm them down. Hamsters tend to be anxious animals and playing classical or jazz music helps soothe them.

Recently, Spotify launched a new feature known as “Pet Playlists.” Users can log in to their accounts and take a brief survey that asks a variety of questions about their pets. First, users will have to select which type of pet they have. The choices include dogs, cats, iguanas, birds or hamsters. Next, they will have to answer a series of questions about their pet, ranking their curiosity, energy and friendliness. After the survey is complete, Spotify will consider the data and compile a playlist of 30 songs that owners and their pets can enjoy. Songs are pulled from owners’ playlists as well as the types of genres that will best suit one’s furry friend.