The Multi-Billion Dollar Industry That Removed “Friends” From Netflix 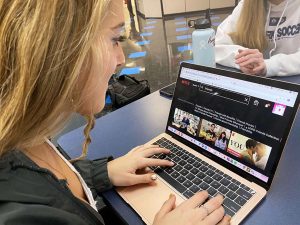 Sophomore Hannah Genser searches for “Friends,” once the second-most streamed show. As of Jan. 1, “Friends” is not available to stream for the next five months. Photo: Amalia Haviv

When Netflix started streaming movies and television series online in 2007, they changed broadcast TV and cable programming forever. Netflix saw potential in the technological advancements that made computers able to stream movies and series while other companies, like Blockbuster, didn’t.

According to a Jan. 12 story by Investopedia, 18.4 million households abandoned cable TV altogether this past year and there is currently only one Blockbuster store left in the world (located in Bend, Oregon). Netflix had the right idea and quickly grew into a billion-dollar company, but a Dec. 20 story by USA Today says Netflix has lost over 1.1 million subscribers because of the arrival of Disney+ in 2019, and is soon to face more competition from the other new streaming companies.

About two years ago, viewers started to see a disappearance of Disney productions from Netflix. These efforts were part of the development of Disney’s new streaming program: Disney+. Apple TV+ is another addition in 2019 and is the cheapest platform in the streaming world. So, what was the reason for the removal of other popular movies and TV shows from Netflix? Like Disney, other production studios realized they could reap more benefits if they created their own streaming services. Proof of this will be evident in the year to come as contracts expire, bids are placed and hit shows like “The Office,” “Friends” and “The Big Bang Theory” are removed from Netflix to be offered by other streaming services.

In the spring of 2020 two major streaming companies will launch: NBCUniversal’s Peacock and HBO Max. As “Friends” enthusiasts bemoaned its recent removal from Netflix, WarnerMedia was writing a heavy check for $425 million. Over five years, the company paid Netflix this amount to have the rights to stream the Warner Bros. show on HBO Max, according to the Los Angeles Times. According to a Nov. 5 Vulture article, HBO Max will also house the popular shows “The Big Bang Theory,” “South Park” and the DC Comics movies.

NBC has paid Netflix $500 million to take back “The Office” to stream on Peacock alongside “Parks and Recreation” and other NBC hits. While it sounds like Netflix is losing its most streamed shows, they have just paid $500 million for five years of “Seinfeld” after it had been streaming exclusively on Hulu. Also, Netflix will have its original series like “Orange Is the New Black” and “Stranger Things.”

The two hooks that attracted consumers to Netflix were the ability to watch what you want, when you want and its relatively low cost. The birth of the various streaming services that all offer their own popular shows forces people to subscribe to multiple platforms. This eliminates both of the benefits that originally reeled in the cable cutting community and leaves TV connoisseurs pondering the question: Will these online streaming companies eventually cost equally as much as cable?