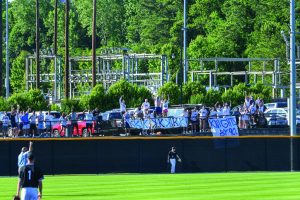 Boys Lacrosse: Boys varsity lacrosse is coming off a sweet 16 appearance in the state playoffs last year. Although they lost three players who now compete for their college teams – Sam Assaf, Andrew Konradt and Charlie Warren – as well as other pivotal players who graduated in the Class of 2019, the team still has high hopes for the season.

With many returning players such as seniors Thomas Siegenthaler, Aidan Gannon, Jack Jacoby, Ben Ginsberg, Andrew Miller, Evan Duncan and Jeremy Leven, as well as important juniors such as Tripp Trimble and Steven Morrisroe, the team has varsity experience and depth to make a run. New members, such as Niko Karetsos, also have potential and will make a positive impact on the team this year. With all this in mind, the boys have playoff hopes in their sights.

Girls Lacrosse: The girls lacrosse team is coming off of a historic playoff appearance, it being the first time the team had ever made the playoffs. Since last spring, the team has made great strides by hiring coach Kelsea Ayers, who will be a difference maker for the team. Coach Ayers most recently worked as an assistant womens lacrosse coach at Stetson University and was a Division I player at The Ohio State University.

The Pace team is blessed with strong senior leadership, with Williams College bound Claire Wierman and fellow seniors Francesca Vaneri, Mae Shippen, Emma Shelton, Nikki Rubin and Sandy Lum heading up the team. There are strong underclassmen who will have a larger role on the team this year, such as juniors Reilly Hamilton, Amalia Maxa and Mary Childs Hall. Sophomores Mackenzie Martin and Alex Spinelli will also contribute to a very deep team. All in all, things are looking up for the team this year and the program as a whole.

Boys Soccer: Last year, boys soccer made a surprising dark horse run to the elite eight, beating No. 1 seed Greater Atlanta Christian (GAC) along the way. The team will look to build upon last year’s strong run; many players have had a full year of varsity experience and grown into much more mature players. Led by seniors Jesus Tadeo and Jared McCall, the team also has great talent in the likes of sophomores Jeremy Avellaneda, Juan Figueroa and Jeffrey Ramos, juniors Jorge Gonzalez Fernando and Anderson Lara, and senior Alan Tapper, who are just a few on the deep roster that will contribute to the upcoming season. With this being said, the team has their eye on the prize as they compete in their first region match of the season at home against Stone Mountain High School tonight at 7.

Girls Soccer: Last year, girls soccer finished with a first round playoff exit in a 7-6 loss to Jefferson, an outcome they look to improve upon this season. Although the team lost valuable players such as Class of 2019 members Madeline Janki, Devan Johnson, Regan Bates and Kayla Ross, players remain with varsity experience, such as seniors Virginia Hobbs, Lenox Herman and Klara Andra-Thomas, as well as junior Caroline Janki and sophomores Hannah Genser, Megan Hardesty and Thea Chastain. Some of these players will take on a larger role this year, and there is no doubt that they have the ability to make some noise this season.

Boys Tennis: In the past two years, the boys tennis team made it to back-to-back state championships, losing to Lovett the first time before enacting revenge this past year to clinch the state title. Although losing last year’s seniors Charlie Hirsch and Will Funston, the team is still returning players vital to another championship run. Seniors Rohan Jatar, Neil Sashti and Finn LaMastra will work with returning juniors Matt Genser and Jordy Elster to create a potent combination, making this team the favorite to defend their title from a year ago.

Boys Golf: The boys golf team is looking to add to their strong finish at state last year, and they have the experience and the talent to do so. Seniors Jimbo Smith, George “Grob” Robbins, Austin Kelly and team captain Ben Crawford will lead the charge, backed up by junior Josh Mininberg and sophomore Ben Shelton. Although Westminster is a perennial power in AAA golf, this year’s blend of seniority and experience on the team should prove to be a mix capable of challenging Westminster and competing for the title.

Girls Golf:  The girls golf roster is thinner this season after losing five seniors, one being a freshman member of the University of North Carolina golf team Aleks Golde. Although the girls team didn’t qualify for the state tournament last year, Golde qualified as an individual player with an area tournament score of 71. The team currently is composed of three returning players: senior Lauren O’Sullivan and sophomores Asata Manigault and Allison Silverboard.

Baseball: The baseball team is coming off of a historic season where they went undefeated in region play, sweeping the likes of Westminster and Lovett on the way to a No. 1 ranking going into the state playoffs, but ultimately lost at the hands of Pike County in the state championship. Although Mitchell O’Berry, Andrew Jenkins, TJ Rafeedie and Brian Zeldin have all moved on to college baseball, the team still has four returning players, sophomores Deuce Jordan and Jae Williams, junior Jayden Thomas and senior Zachary Howard, who started last year. With the addition of sophomore RJ Austin and junior Evan Smith-Rooks, the team is looking to avenge their second place finish last year and win it all, and they have the players to back it up.

Track and Field: This year’s track team has a chance to be highly successful. On the boys’ side, senior twins George Adams and Sam Adams, who finished first and second at state and are running in college at the University of Pennsylvania and the University of Georgia, respectively, will captain a team that can bring home a ton of hardware. Backed up by seniors Quill Healey, Connor Husk and Jay Satisky, junior Sam Webb, sophomores George and Edward Blaha and Robert Mallis, it is a rare combination of talent across all grades and types of competitions, on the track and in field competitions such as shot put.

The girls team will also be very talented, led by seniors Payton Payne and Paula Sandoval, as well as Erin Hood. In the field events, senior Brianna Thomas will lead the way. Coach Jolie Cunningham has inherited a highly talented team with the ability to set records of many types.