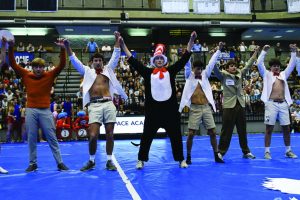 The freshman class traditionally is expected to do the worst on Spirit Week; however, the Class of 2023 blew everyone away. Though working with a small budget, the freshmen somehow managed to put together costumes that perfectly expressed each character. Unfortunately, their decorations were sparse: paper plates and masks taped to the stone walls outside with scattered chalk drawings on the quad between the Upper School and the Inman Center. However, what they lacked in decorations they made up for in their dance.

The freshmen seemed like they would face difficulties when they chose the theme of “Scooby-Doo,” which gave them a significantly smaller cast of characters to work with. However, the class surprised the audience with well-choreographed dances that they performed in almost perfect unison. Oliver Loree, one of the “Shaggys,” made the crowds go wild with his breakdancing. Although some of the group dances were basic and formulaic at times, it was an amazing start to the Spirit Week skits for the Class of 2023.

After a surprising upset last year, placing higher in the Spirit Week competition than the Class of 2021, the Class of 2022 once again shocked the crowd, performing unique dances that made glitches in their music no problem. Wrestling with a cliché but still relatively new theme of “Spongebob Squarepants,” the sophomores creatively decked out the cafeteria, decorating their space with cups of Spongebob straws and streamers, as well as Squidward and Plankton posters. The bubbles taped to the windows with every teacher’s name on them were also a nice touch.

The sophomores’ banner blew audiences away with well-drawn, neat and dynamic paintings of each Spongebob character in perfect color that practically glowed. In the minutes before their dance, sophomores passed out an impressive bribe of Sprite bottles made to look like kelp juice along with Spongebob themed cookies and treats that brought their theme to life.

Things were looking up for the Class of 2022 until the music glitched during the Plankton dance starring Hannah Genser. However, the sophomores powered through, completing their dance and singing along to the music until it returned.

The Class of 2021 ended last year’s Spirit Week on a rough note after losing to the freshmen; however, they bounced back this year with the creative theme of “Time Machine” and an improved dance. Though their decorations weren’t as amazing as the class of 2020’s the year before, the juniors’ decorations definitely improved from last year.

The juniors had an OK start with their first video, which starred Sloan Baker and Pearson Bates trying to find a time machine on Pace campus. Some jokes went over people’s heads, but it did get a few good laughs. Although their video wasn’t amazing, their morning dance really made the junior class shine. Including dances from Casey Shoulberg, Maggie Jenkins, Matthew Cleveland and Josh Mininberg, their dance was peppy, fun and bright.

The Class of 2021’s creative theme complemented their dances, as they began their first dance in the shape of a clock, far from the basic double lines at the beginning of many group dances. Crowds went wild for Gus Thomas and Darren Rosing’s Socs versus Greasers dances, with Tripp Trimble and Bates stealing the show by landing a flip in unison.

The senior class has always managed to pull off an amazing Spirit Week, and this year was no exception. Starting off strong with a hilarious video of Dr. Seuss and company trying to find Tanner Walton, who had been kidnapped by the Grinch, the seniors launched into a show stopping morning dance. Smoke and colorful light filled the stage, complementing the well-choreographed dance. The rest of the seniors then joined the morning dancers, culminating in one final performance.

The seniors left nothing out with their decorations, covering the second floor of the Upper School from top to bottom in streamers to represent Whoville, adorning the walls with nostalgic quotes of Dr. Seuss’s “Oh the Places You’ll Go” and “Green Eggs and Ham,” and remaking the Inman Center into the Lorax forest.

The nostalgia didn’t stop there. Seniors opened their afternoon dance with the two leads Walton and Morgan Payne asking “Dr. Seuss” to read books, as the characters from each book stood up in the background. One of the best dance sequences was Thing 1 and Thing 2, which perfectly captured the book characters’ mischievousness, with the Oncelor vs. the Lorax following as a close second. The seniors couldn’t have ended better than with a reading of “Oh The Places You’ll Go,” a bittersweet end to the final Spirit Week for the Class of 2020.