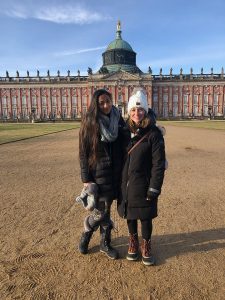 Immediately following the chaos of Spirit Week, a group of 17 seniors and three teachers departed from Hartsfield-Jackson International Airport and headed to Munich for the Isdell Center for Global Learning (ICGL) trip to Germany. With a focus on history, art and culture, they explored some of the most famous and historically important sites from World War II to now.

Beginning the journey in Munich, students visited the Staatliche Antikensammlungen museum and the Alte Pinakothek museum where they saw ancient Greek vases as well as the world’s largest collection of artwork by Peter Paul Rubens. The group also enjoyed German cuisine at Hofbräuhaus and Spatenhaus in between walking tours of the city.

The group then headed to Nuremberg where they toured the famous Courtroom 600 where Nazis were put on trial in 1946. Visiting the site of the Nuremberg Trials went hand in hand with visiting the Dachau concentration camp.

“Visiting Dachau and Nuremberg are emotionally draining experiences,” said chaperone and math teacher Jason Smith. “Dachau was the site and wellspring of some of the more terrible crimes, while the Nuremberg Trials, which took place in the courtroom we visited there, were an attempt to come to terms with, and account for, those awful crimes.” Other chaperones were history department chair Tim Hornor and math teacher Heather McCloskey.

Upon arrival in Berlin, the group instantly sprang into action, visiting even more historic landmarks such as the Berlin Wall, the Reichstag and Checkpoint Charlie. “It was cool to see all the places I had learned about in history like Checkpoint Charlie and pieces of the Berlin Wall,” said senior Zoie Frier. The group also attended the Berlin Philharmonic and visited Berlin’s Memorial to the Murdered Jews of Europe, a series of different corridors constructed to remember the events of the Holocaust.

With one of the trip’s emphases being art, they visited many museums including the Pergamon Museum, the Altes Museum and the Neues Museum. “My favorite place we visited was the Pergamon Museum,” said senior Lucy Ferry. “We got to see several pieces of artwork that we have learned about in Mr. Hornor’s Art History class, including the Ishtar Gate. Everyone on the trip that is in Art History was extremely excited, so the energy in the group was contagious.”

To take a break from the history of Germany the day before departure, the group was able to attend a soccer match between Bayern Munich and Hertha Berlin in the 1936 Olympic Stadium in Berlin.

Despite not knowing German, the group was able to navigate their way around the country through the leadership of their chaperones. “Mr. Hornor’s German expertise made it easy to communicate with others, and he even taught us some German to use,” said senior Paul-Louis Biondi. “But also, most Germans speak English, too.”

Even though some people got sick with fevers and sore throats during the trip, everyone eventually recovered enough to enjoy some incredible sites in Germany. After an exhausting and action-filled 11-day trip, the students returned having learned a lot.