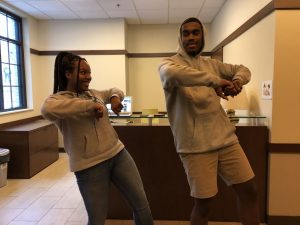 August 2019 marked the 400th anniversary of the arrival of the first ship of enslaved Africans to the mainland of what is now the United States. They arrived in Jamestown, Virginia, a place that represents the racial origin story of African Americans. For four centuries after the arrival of this ship, African Americans have struggled to gain freedom, full citizenship and equality.

Each year, Americans celebrate Black History Month to recognize the central role African Americans have played in U.S. history and their countless achievements that have contributed to American society.

The event originated as “Negro History Week.” In 1926, esteemed Harvard historian Carter G. Woodson sponsored a week to celebrate black history that would coincide with President Abraham Lincoln’s birthday on Feb. 12 and Frederick Douglass’ birthday on Feb. 14. The event inspired schools and communities nationwide. In the decades that followed, mayors and other government officials across the country issued annual proclamations to recognize Negro History Week.

In 1970, the first celebration of Black History Month took place at Kent State University in Kent, Ohio. College campuses across the U.S. began observing this month, and in 1976, President Gerald Ford officially recognized Black History Month as a national observance. President Ford asked the American public to “seize the opportunity to honor the too-often neglected accomplishments of black Americans in every area of endeavor throughout our history.”

Along with America and other nations around the world, the Pace community devotes the month of February to honoring black history and excellence. At Pace, students in the Black Student Alliance along with Upper School Diversity & Inclusion Coordinator Omar López Thismón planned two assemblies with the aim of involving the student body and faculty in educational, interactive and exciting events.

Pace Director of College Counseling Jonathan Ferrell led the first assembly on Feb. 5. The second assembly scheduled for Feb. 19 will be led by students.

“To me, Black History Month is a celebration of our black culture and a time to explain to everyone what it means to be black in America,” said Black Student Alliance leader and senior Sydney Thomas. “I think that this month is special because anything new that you learn is a great thing. No matter how small it may be, taking away anything is big.”

Although excitement comes with this month, it also evokes mixed sentiments. “I believe as an American society, we have this detached vision of what American history is and what black history is,” said Mr. López Thismón. “I don’t think we think about black history the same way we think about our founding fathers, and I think that we should. The thing is, black history should just be American history. The two are the same. I believe Black History Month is an attempt to move this detachment more into our history and incorporate it into the public consciousness.”

The issue with the way the U.S. understands black history often comes with the way schools teach history altogether. “When I went to high school, I took everything at face value, believing it was all truth,” said Mr. López Thismón. “In adulthood, I finally realized that it wasn’t all true and there was a detachment of histories. I believe we often gloss over certain events or times in history because they might be unpleasant to talk about. We teach topics at surface level because they are uncomfortable. The history that we have is so much deeper than the little blurbs that we have in our history textbooks.”

According to Mr. López Thismón, believing the United States is a beacon of light for the entire world stands in direct contradiction to all of the atrocities that have occurred in this country.

Black Student Alliance leader and junior Cole Middleton has similar feelings regarding the teaching of American history. “We have to figure out some way to make people more comfortable talking about things like racism, slavery or the Civil War,” said Middleton. “I think we need to stop shielding certain information because this only gives us a warped version of history. I think we should just learn the truth and the straight facts and then from there we can make our own opinions.”

Middleton also believes that the environment in which we learn plays a vital role in how we can move forward and become a more open-minded school community and larger society. “Sometimes in class when we are talking about something like slavery, kids will turn around and see how the black student is reacting,” said Middleton. “This needs to stop. We need to be comfortable talking about uncomfortable things, and doing small things like staring at a certain individual makes the environment really tense.”

“I don’t like the fact that we need [Black History Month] but I understand the magnitude and importance of it in society,” said Mr. López Thismón. “There is meaning in the month as it gives people a chance to learn more about others, but having this month also makes many believe that black history is not as significant as ‘American history’ during the other 11 months of the year.”

“Just challenge yourself to genuinely be curious and seek to understand others,” Mr. López Thismón continued. “You cannot say because it is black history and you are not black, it doesn’t apply to you. It applies to all of us.”