Pace Actors Showed Up to Show Out at Winter Showcase 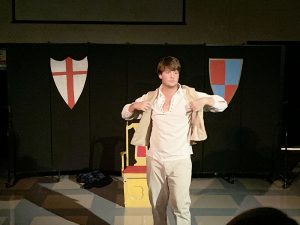 Following their success with October’s one-act play “She Kills Monsters,” the Pace Academy thespians were back at it again Jan. 24 and 25 for the annual Winter Showcase. While 2019’s Winter Showcase truly made a name for the event, the 2020 production amassed even more esteem and attention, bringing new humor and well developed characters to the stage.

The Showcase is not comprised of one coherent plot or story, but rather knits together individual scenes from a variety of well-known plays and student-written works. This year’s show focused on the work of American playwright David Ives, but also included an original work by senior Jackson Gray called “Dream On.”

The Showcase is also unique for utilizing various spots across the Pace campus for the seven distinct scenes. After opening words by Upper School Visual & Performing Arts Chairperson Sean Bryan, audience members were divided into different groups and led to separate locations. The Showcase was comprised of 33 cast members and crew who transformed rudimentary parts of campus into vibrant sets for compelling theatre, including the FAC Lobby, band room, library, chorus room and the first floor’s Room 100. After audiences finished one scene, they were escorted to the next room for another scene, until they had seen all seven on their dramatic odyssey.

Ullman and Carson perfectly advertised the all-too-relatable awkwardness and delicacy from which most real-life relationships are born. But, the scene’s energy dramatically changed when the mayflies learn from their television set that they have lifespans of just one day and that the two of them were up against the fast approaching tides of death.

Junior Michael Fu hilariously played the television personality David Attenborough who brought the devastating revelation to the flies. His part brought much-needed comedic relief from the building sexual tension on stage. In short, the scene featured three extremely talented actors that effectively executed their mission: to entertain. While Ullman and Carson have already established respectable reputations for themselves within Pace’s theatre department, Fu’s work in “Time Flies” stole the show.

Another highlight of the Showcase, located in the band room, was the student adaptation of David Ives’ work, “The Philadelphia.” Junior Denzel Welsh played the happy-go-lucky Philadelphian named Al, whose mind resides on its own joyful “cosmic beach.” He sits peacefully and waits for his friend, Philly, to arrive. Played by senior Madison Edwards, Philly is a typical, busy millennial who vocalizes and dramatizes the everyday struggles of contemporary Americans in a completely empathetic episode of stressful agony. She disrupts Al’s tranquility with nervous energy and pessimism. He decides to teach her philosophical lessons of optimism.

Welsh and Edwards impressively played off each other with equally captivating energies, a feat that might have posed a challenge to other amateur actors since the pair successfully represented completely opposite mentalities. The scene also featured sophomore Lauren Smith as the waitress. She masterfully underscored the lively personas of Welsh and Edwards by delivering flat lines with a sarcastic spirit. Smith’s role tied the piece together the way all millennials wish to perform: with minimum effort, maximum results.

The best scene of the Winter Showcase was found in the chorus room. Seniors Davis Futrell, Bridges Spencer and Thomas Siegenthaler turned the most tragic and traditional piece of theatre into something hilarious and modern: Shakespeare’s “Hamlet.” The scene brought new definitions to “a play within a play” as “Hamlet” was performed within the context of reality.

Framed by references to frat life, antipathy for schoolwork and Juuling, the boys initially recounted how Pace’s theatre department coerced them to participate in the first place before going on to embody Hamlet’s characters. Each of the boys played several different roles in an extremely sped-up rehashing of the story’s basic plot. While Siegenthaler’s Hamlet was splendidly bold yet timid and Spencer’s Polonius was particularly assertive, none of the roles compared to Futrell’s iconic portrayal of the crazed Ophelia on the verge of madness.

All educated literature fanatics know this precise breakdown when grief and sorrow eat away at Ophelia’s sanity before her emblematic drowning. But none has ever seen it executed on stage the way Futrell did. Fashioning a mismatched dress and an out-of-place blonde rock-and-roll wig, Futrell owned that role with high-pitched screams and jaunty body movements. The crowd could not stop laughing.

The boys also incorporated certain audience members in their inclusive and inviting skit. Senior Charlotte Little was brought from the audience to perform and sophomore Cole Kaplan was targeted for supposedly laughing at Siegenthaler’s monologue. Capitalizing on the humor of anachronisms and exploiting the alluring engagement of teenage attitude, the boys killed it. Amidst the roaring applause at the scene’s close, one shout from the back row could be heard: “This is theatre!”

The nearly two-hour show blended comedy with relatable situations in the most exciting ways. Other standout roles were senior Lauren O’Sullivan’s brash portrayal of Annie in “The Art of the Fugue” and senior Harrison Greenbaum’s confident embodiment of Zac in “Band Geeks.” It was also extraordinary that students had the opportunity to direct certain skits.

One of the most promising aspects of the night, though, was how responsive and supportive the audiences were. It’s a great thing that so many seniors gave up time on their weekend nights to support Pace’s thespians. If you missed the Winter Showcase but would like to support them in the future, be on the lookout for their sure-to-be riveting production of “The Music Man” in April.