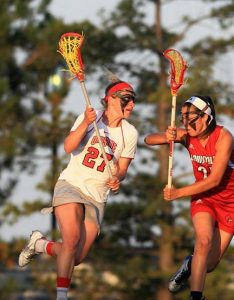 Kelsea Ayers races past a defender to score a goal for Ohio State. Photo: Kelsea Ayers

She has never been a basketball or PE teacher; however, this is not the first time in her career as a high school lacrosse coach. She had that same role at Indian River High School in Delaware. “Pace has a lot more resources than my old school and I am excited to see what I can do here,” said Coach Ayers. She also gained coaching experience coaching girls lacrosse on the club scene in Maryland for various clubs.

Coach Ayers attended Ohio State University as an undergraduate and played varsity lacrosse there. Coach Ayers earned the Big Ten Scholar-Athlete honors award all four years for her high performance on the lacrosse field and in the classroom. While she was at Ohio State, the team made two NCAA tournament appearances and won the Big 10 title. Coach Ayers was a significant contributor to the program with 95 points and 74 goals over her college career.

As a member of the basketball coaching staff, she is working alongside Stephanie Sosebee, Chelsea Brock and Bobbi Boyer, who all assist Athletic Director and head coach Troy Baker in leading the girls varsity basketball team. She has not played basketball since high school so Coach Ayers had to readjust the first couple of weeks. However, her knowledge of the hard work it takes to be a great athlete helped the girls team.

“She pushes us more than anyone, which I think is an incredible trait to have as a coach,” said senior captain Virginia Hobbs. “She pushes us to be tough and to dig deep… which has helped the team grow and become stronger.” The team finished the regular season with a 13-13 record.

Her competitive spirit also came out as the team bonded over winter break on their trip to Memphis, Tennessee. The team watched the college football playoffs together, which included her alma mater Ohio State. “We were getting so heated by the game and when they lost she told me she couldn’t talk to me that day,” said Hobbs.

Her love for sports led her to the job as a lower and middle school PE teacher for Pace. She explained that coaching PE is her dream job and that there is no job she would want to do more. “Everyone has been willing to help because I had never been a PE teacher before,” said Coach Ayers. “My bosses and the whole department have been awesome.”

Her role at Pace has allowed Coach Ayers to do what she is passionate about. “I get to coach kids every single day and that’s really what I wanted to do,” she said. Coach Ayers was amazed by the organization of the Pace PE department and the amount of resources they had to give the kids the best opportunity to learn. “I could not believe the rotations we are able to offer,” she said.

Coach Ayers hopes to grow the Pace lacrosse program and take it to new levels. She will bring her past experience as a player and coach to the team this season. “I have learned a lot from basketball that can translate to lacrosse and hope to bring some of the defensive things to the field,” she said.

The team made history last year making the playoffs for the first time, but the aspirations of the team do not stop there. “We hope with a new coach we can improve a lot and win a lot more games,” said junior Madison Martin. “From our first time meeting Kelsey, I could tell she knew a ton about lacrosse.” The team plays their first game on Feb. 19 against Dunwoody High School.

Her love for activity and sports is apparent in her free time. Outside of Pace, Coach Ayers spends most of her time working out or going on adventures. This is Coach Ayers’ first time living in Georgia, so she has been trying to spend lots of time exploring the whole state. “I have been hiking, exploring and finding new food spots,” she said.