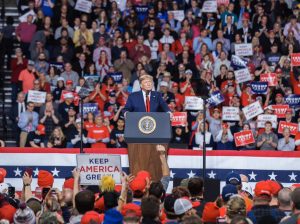 President Donald Trump speaks at a rally in Toledo, Ohio on Jan. 9. Photo: @realdonaldtrump on Twitter

Donald Trump and his administration underwent a wild, unpredictable, but most of all successful 2019. Although there were a few negatives, the pros far outweigh the cons and place Donald Trump as one of the best presidents in recent history.

Trump’s 2016 election campaign focused on promises to create more American jobs, fix the illegal immigration problem, destroy ISIS, and change the flaws of Obamacare, among other things. Keep in mind that this article just focuses on the president’s accomplishments from the past year and does not include anything before or after 2019.

As mentioned, the Trump administration came into office with big plans to solve illegal immigration issues. In 2019, with little to no help from the Democratic majority in the House, Donald Trump funneled money towards the much-needed border wall. His promise that Mexico would pay for the wall obviously did not materialize, leaving Trump scouring for a better way to fund the wall.

At the beginning of the year, Congress only approved $1.6 billion for the wall (a dismal amount), which caused a memorable government shutdown because Trump wanted over 5 billion dollars. Five billion dollars sounds like a lot of money, but the sum is minuscule compared to the amount illegal immigrants receive in federal aid: over $100 billion annually, according to the Federation for American Immigration Reform. Trump has received less funding from Congress than he had hoped for, but he has started diverting money from the military budget and recently obtained a $3.6 billion sum from Congress, adding up to $8.1 billion in wall funds altogether. Currently, the president has built over 650 miles of wall and 124 miles are under construction.

Immigration and Customs Enforcement (ICE) also seems to be getting more effective. The number of immigrants deported by the Trump administration is far lower than Obama’s numbers three years into his presidency. These numbers are due to stricter illegal immigration rules which stop Central Americans from coming to America. For example, ICE strengthened “interior enforcement efforts,” which the agency contributes to the lower numbers (The Hill).

Next, the Trump administration has made great strides in strengthening the military. Earlier last year, the U.S. Army announced that the Islamic State of Iraq and Syria (ISIS) had lost all controlled land, effectively crushing the ISIS caliphate. After former President Barack Obama funded the group and allowed violence to spread for years, Trump has finally put a dent in the destruction caused by the terrorist group. Furthermore, a U.S. special operations raid assassinated the leader of ISIS, Al Baghdadi, back in October.

Also in 2019, Trump stuck with his goal of modernizing the military’s weapons and nuclear arsenal. Before Trump entered office, the military was in a decrepit state with vehicles from the Reagan years but is becoming increasingly modern with upgrades to tanks, submarines and unmanned systems (Forbes). The nuclear arsenal is also being upgraded to match the likes of China but mostly Russia.

Another interesting part of Trump’s policy in 2019 involved outer space. Russia and China both are ahead of the U.S. when it comes to military space technology. Trump made modernizing technology in space a priority in order to match other foreign powers. The President has gone so far as to create a sixth branch of the United States military: The Space Force, which is fascinating. No other President in history has done more to make sure the nation’s interests in space are safe.

Regarding healthcare, Trump and his administration had many great successes last year. First of all, Trump repealed the individual mandate policy in Obamacare that forced individuals to either purchase insurance or pay a penalty. Healthcare enrollment dropped by 2.8 million, an effect of giving low-risk people the option to not buy healthcare insurance. Additionally, the rate of growth in healthcare spending has slowed and the administration expanded cheaper healthcare services for poorer Americans. At the same time, the President reformed Medicare to prevent overcharging for life-saving drugs for senior citizens.

Something the media does not really cover or report on is Trump’s policies that positively affect minorities. Yet last year, the Trump administration economically and socially helped out minorities in many ways. Economically, the black, Hispanic and Asian unemployment rates hit record lows. Also, the number of Americans lifted out of the food stamp program recently hit nearly 4 million people; a program that is utilized by the black and Hispanic communities proportionally more than the general population.

In the social sphere, Trump led the effort to federally put hundreds of millions of dollars towards historically black colleges and universities, more than any other president in history. Donald Trump signed the First Step Act as well, which aimed at reducing the federal prison population. The act has already freed and shortened sentences for thousands of federal inmates. This has dramatically assisted African American men who account for 70% of those sentence shortenings.

The accomplishments mentioned above are all extraordinary, but the most important is the success of the U.S. economy under Donald Trump. There is no disputing the facts and figures. Job numbers and growth have been outstanding in 2019. The number of jobs created continues to smash analysts’ predictions, and now totals over 6 million new jobs. Closely correlated with all the job growth, the unemployment rate is the lowest it has been in nearly 50 years.

Another aspect of Trump’s success came in the stock market: the market broke records last year as stocks skyrocketed in mid-to-late 2019. The S&P 500 Index was up 29.2% and the Dow Jones Industrial Average was up 23.42% in 2019, both indicating record highs for the two indexes. It was a great year for investors.

Trade was an important part of Donald Trump’s election, and in 2019, he made major moves. Most importantly, the replacement for the North American Free Trade Agreement (NAFTA) was created and signed into law, titled the United States-Mexico-Canada Agreement (USMCA). The pact sets up many standards involving labor provisions and technology. Also, the agreement passed with bipartisan support in the House and Senate; a very nice thing to see in the polarized society we live in today. However, Canada has not ratified the trade agreement so until then nothing is in effect.

Of course, a review of the president’s year cannot leave out the impeachment procedure. Just to be clear, the impeachment of the president was a total sham in an attempt to destroy his reputation among the American people. After House Speaker Nancy Pelosi stated that an impeachment would have to be along bipartisan lines in March, her rhetoric and actions changed completely throughout the year. Once Pelosi saw accomplishment after accomplishment from the President and that the Mueller Report had no damning evidence, she realized something had to be done in order for the Democrats to have a chance in the 2020 election.

With that fear in mind, Pelosi and others accused Trump of urging the Ukrainian president to investigate the wrong-doings of Hunter Biden, Joe Biden’s son. Trump and President Zelensky chatted about trips on each other’s private jets and also the investigation about past White House corruption. Zelensky has stated many times that he never felt any pressure and that there was no quid pro quo. Will the Democrats listen to what Ukraine, the country of interest, has to say, or will they keep pushing their personal agendas to remove the best President since Ronald Reagan? I assume push their own agendas.

Although all of the above accomplishments are impressive and important, many policies and achievements were not mentioned. For those interested in other actions Trump has taken while in office, the White House website has a long list of policies enacted.