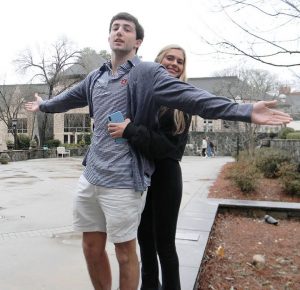 Lily Kahn: Hey! Are you recording this?

KN: Alright, so how long have y’all been dating?

BC: It’s been about three months now. Wow!

KN: Good stuff. When did y’all first meet or talk to each other?

KN: Come on, “Squatch.” Why did you decide to start talking?

BC: Well, I always knew of her but was too shy to say anything. I just thought she was really cute, though, so I went for it. Turned out pretty well, I guess.

KN: What’s it like being a couple but in different grades?

BC: It’s different because we don’t have any classes together, so we try and talk during break and lunch as much as we can.

LK: Yeah, I always look forward to those times because I don’t get to see him much otherwise during the day. We also hangout after school or practices.

KN: That’s nice. What’s your favorite trait about each other?

BC: Her personality. She’s really fun to talk to and I just love being with her.

KN: What was the first date y’all went on?

LK: Oh my god no. OK fine, well, kind of. That was our first real date night, but he took me to Taco Bell once before that.

(LK and BC laughing)

LK: He paid, but I have paid for him before.

KN: Do you remember what the other person ordered at Houston’s?

BC: She got pickles, I think. Chicken fingers and pickles.

LK: I don’t even know what he got. It was like a sandwich, a Reuben something. It really didn’t look good.

BC: Nope. Are you serious? It was a French dip sandwich.

KN: OK now, what did you get each other for Christmas?

BC: I got her a sexy shirt. She picked it and I just paid for it.

LK: His mom paid for it, and he got me eyeliner. I got him a weighted blanket that was really expensive.

KN: That’s nice of you both. What’s your favorite thing to do together?

BC: We just hang out and talk about our feelings a lot!

LK: Oh god, that’s awful. I guess we watch “Black Mirror” a lot. He only ever wants to watch “Star Wars,” though.

KN: How did y’all’s families react to each other?

BC: Pretty good, I’d say. They were very welcoming.

LK: Same for me. I met his brother “Chuck” and his dog is so cute.

KN: Nice. Now let’s do some fast facts. What are each other’s shoe sizes, birthdays and favorite foods?

BC: Look at me, I definitely eat.

KN: Are you going to miss him next year when he goes to college?

KN: OK, we won’t talk about that. Is there anything you want to say to each other before we wrap up?

LK: Really? You are so mean (jokingly).

LK: Love you too, Squatchy!

KN: Cool! Thanks for sharing and see you around.