Childhood Has Changed Through the Years 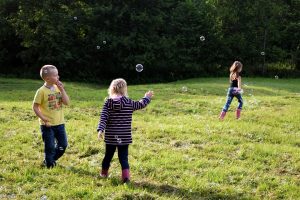 The kind of idyllic childhood many of our parents can attest to involves lots of outdoor playtime. Photo: Pixabay

“When I was your age, I…” A phrase that many teenagers can attest to hearing at least once is often accompanied by an exaggerated story that makes you want to roll your eyes. However, our childhoods have been remarkably different from those before us, especially for those born in the latter years of the 2000s. The rise of technology in the past decade has irrevocably changed the youth of today, for better or for worse. But how?

The popularity of technology with children may be due to the fact that their freedom is more and more often severely restricted. Due to the (sometimes irrational) fear that parents have of their children being kidnapped, (perhaps a residual of the Satanic Panic of the ’70s, ’80s, and ’90s), the outside time and rough play that once characterized childhood has slowly started to fade away.

The Satanic Panic was a period of time during which the fear of satanic ritual abuse was at an all-time high. In the aftermath of the Manson cult murders, a rash of accusations came to the forefront of the media, and included false allegations of satanic ritual abuse by daycare centers and child kidnappings. The justice system was not immune to the terror permeating the public consciousness, resulting in several convictions (many based on falsified evidence) that seemed to confirm parents’ worst fears. This ultimately led to the development of a parenting style coined “helicopter parenting.”

“We sort of went through, I think, a phase where parenting was really kind of hands off and we saw some detrimental effects from that, such as drug use, risky sexual behaviors, and getting into trouble with the law,” said Pace upper school counselor Amelia Tuttle. “We kind of went from one extreme to another, to parents being kind of on top of their children, and that didn’t help either.” The second extreme, she noted, was what the majority of Generation Z (born 1995-2015) was raised with.

“As a parent, you want to make sure that your child is safe,” Mrs. Tuttle said. “However, taking it too far can cause conflict and tension. That’s also a hard question because kids conceive and understand things differently. Especially for a teenager, who wants to separate and be their own person, when a parent is too hands on, they can feel stifled and it may cause a problem.”

Stories that parents and grandparents pass on from their own youth can feel a thousand years away from the ones current children and teens are experiencing. However, it’s hard to characterize one as better than the other.

Growing up in the age of technology has led children to be more socially aware than ever, marked by their access to a global community leading to a broader perspective. This has likely contributed to the recent surge of teenage-led movements, with icons such as Greta Thunberg and Emma González coming to the forefront of the public sphere. Children and teens are able to better refine their skills (especially artists) through teaching themselves more about certain crafts through videos and posts made by those more experienced.

Though being thrust into a brand new world can be fascinating, it can be detrimental. Children are far more susceptible to fake facts and radicalization, especially from internet stars. The obvious problem of talking to others online is also one that parents seem to obsess over, for good reason – it can be just another method of child molestation or kidnapping.

Each time period has its own benefits and downsides for children. Though it may be tempting to long for the simplicity of the past, or the wild escapades shared in stories by parents, the generation currently on the rise is sure to make a mark on the world in its own way.