President Trump Failed Us in 2019 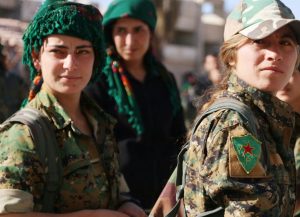 Kurdish soldiers were without U.S. support at a critical time in their fight against Turkish aggressors in Northern Syria. Photo: Wikimedia Commons

Donald Trump’s administration plunged America deeper into extreme hyper-partisanship and discord in 2019 and into 2020. It seemed as if every week another scandal occurred, or he enacted a new policy that sparked outrage in both the U.S. and across the world.

In 2016, though he lost the popular vote by 3 million votes, Trump managed to win the election with a majority of Electoral College votes. Since the election, he has managed to roll back beneficial reforms enacted by the Obama administration in the areas of environmental protection, healthcare, and civil and human rights among others. He has also brought us close to war on numerous occasions.

Last year began with the government shutdown in December 2018. The longest-running shutdown in American history, it prompted outrage and sympathy for those who were no longer being paid. Why did this happen? When Congress rejected Trump’s demand for 5.7 billion dollars to build the border wall that was unpopular among Americans, he decided that the best course of action was to deprive those same citizens of their paychecks, crippling the finances of 800,000 families. In hopes of forcing Congress to go along with his antics, he considered declaring a non-existent state of emergency on the Southern border.

The government shutdown finally ended on its 35th day, with a spending deal that did not provide any money for the border wall. Without the funding he sought, he declared a state of emergency to gain access to over 8 billion dollars from the Department of Defense, Homeland Security and the Treasury Department, directly attacking democracy and the checks and balances that America has always stood for.

Not long after that, he held a summit with North Korean leader Kim Jong-un; though this seemed like the perfect chance for peace and goodwill to be established between the two nations, it ended early, with no nuclear peace agreement or deal. Because of his failure in this area, North Korea still stands as a threat to the U.S.

On April 18, the Mueller report was released. Though it did not find that Trump had colluded with Russia during the 2016 election, it did not take a position on the charges of obstruction of justice, something that Trump has a long history of doing, even now. He has admitted to withholding evidence from the impeachment trial, a legitimate crime that he found brag-worthy.

During the summer, President Trump caused the largest public outcry in his entire term. When the inhumane conditions of the immigration detainment camps were exposed to the public, the human rights abuses evoked anger and sympathy for the children and adults alike who were suffering, seemingly held hostage. Though some immigrants crossed the border illegally, some were seeking asylum which is perfectly legal, and yet all were treated worse than the most dangerous prisoners.

Children were separated from their parents and held in freezing cages with little to no medical services, food and viable water sources. They reported drinking from toilets and older girls having to become de-facto mothers to children who were too young to care for themselves.

Children in these camps were held away from their parents for up to nearly ten months, alone and scared in a country that seemingly hated them. The camps were not only cruel but even deadly. Twenty-four people have died in the detention camps under the Trump administration. This is due to the extreme neglect of the people detained in the camps and the lack of regular inspections. Trump’s xenophobia resulted in the death of real people and the devastation of their families and the nation’s reputation.

It also seeped to his supporters, creating a huge divide in the nation, not only among party lines. The two groups were polarized over the issue, his supporters becoming more and more willing to pretend as if they had seen nothing at all, ignoring the suffering of the immigrants. His opponents on the other hand, rallied and protested, creating enough of a stir that he was eventually forced to relent, ceasing the family separation policy and enforcing the law that requires children to be returned to their parents within 30 days; however, it was clear that he only did so to end the outcry, not because of any compassion he felt for his fellow human beings.

That was not an end to the blood on his hands, however. Who can forget his seeming support for the murder of the Kurds, some of our closest allies? After hastily pulling troops out of northeastern Syria, he left the Kurdish fighters to try and deal with the looming threat of Turkey alone. They were quickly overwhelmed without the support of the American soldiers, leaving them vulnerable.

Though the U.S. indeed should have lessened its involvement in the region, it should have been done slowly, and with insurance that our allies would be prepared to take on Turkey. Instead, he yanked the foundation from beneath them, resulting in a bloody genocide of the Kurdish people. The Turkish offensive against them is “on the cusp of genocide,” said Senator Richard Blumenthal in October 2019. Had Turkey not agreed to a ceasefire to allow the Kurdish forces to withdraw from the region, there probably would have been a repeat of the Anfal genocide from 1986-1989, when hundreds of thousands of Kurds were massacred.

Donald Trump has not only caused significant harm to people and a seemingly irreparable rift through the fabric of America and the world, but he also has blood on his hands. The year 2019 simply served as a reminder of the type of damage a hateful person can cause when given too much power.