No Matter Your Political Party, You Should Be Worried by Tensions With Iran 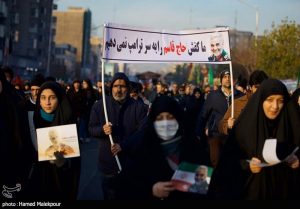 Iranian citizens take to the streets to mourn the death of Soleimani in January. Photo: Wikimedia Commona

On Jan. 2 the Pentagon announced that the U.S. killed Major General Qassem Soleimani, head of Iran’s paramilitary forces, in an airstrike in retaliation for rockets launched at a U.S. military base.

Soleimani was an incredibly important and influential figure. Because Iran has weak conventional forces, it relies heavily on paramilitary forces such as the IRGC-QF (Islamic Revolutionary Guard Corps Quds Force), which is an essential tool for Iran’s foreign policy and which Soleimani headed up.

Almost immediately after the attack, the Pentagon claimed that the murder was meant to head off supposed imminent attacks against American troops. Had that been true, then President Trump could indeed have authorized the strike without Congressional approval. However, as soon became apparent in the hesitant and unsatisfying justifications from the White House, there was no clear evidence that there was actually an imminent danger to Americans.

Why would it matter? Because assassination has been illegal in the U.S. since 1981, making Trump’s one-sided decision to authorize the strike a clear violation of his limited presidential powers. Although there are certain exceptions to this, known as “targeted killing,” these exceptions are much-debated and controversial. In the wake of the assassination, a debate has exploded over whether it was a justified preemptive strike or an illegal assassination. What has made the assassination especially controversial is that it occurred on Iraqi soil without Iraq’s consent.

Within hours, news outlets and the Internet had exploded with speculation and fear-mongering. Fears of World War III spread, with hashtags and memes proliferating about a supposed upcoming draft.

Now, a month removed from the shocking news, those fears have proved (mostly) unwarranted. For the time being, at least, there will be no fiery doomsday. But that doesn’t mean there were no consequences. Only days later, in retaliation for the attack, Iranian troops downed a Canadian civilian airline. It demonstrates a depressing truth: oftentimes, America is the last country to take the fall for its military decisions.

The case for killing Soleimani has been presented as such: he was a man with the blood of many Americans on his hands who posed an imminent threat to American troops. The first part of this statement is undoubtedly true – the Quds Force is indeed responsible for the death of many Americans, and Soleimani is responsible for the deaths of hundreds of Americans.

But by making a practically unilateral decision to kill him, Trump handed Iran a blank check of justification to kill hundreds more Americans. On the opposite side is the argument that killing Soleimani was a gross abuse of executive power and an incredibly risky decision that unnecessarily escalated tensions between the two countries.

The choice to kill Soleimani should be troubling to any American regardless of their political affiliation. Yes, Iran is the largest state sponsor of terrorism in the region, and America does need to neutralize threats to American troops. But brazenly murdering high-level officials does nothing but escalate the risk of operation in the region and antagonize the Iranian population.

Many are now breathing a sigh of relief. So far, no bombs have been dropped. There have not, some people claim, been any terrible consequences (the tragic and painful deaths of 176 civilians have already been buried in the news cycle). However, whatever happens in the coming months, any American who cares about avoiding war should be terrified.

It should also be noted that no U.S. president has ever lost re-election during wartime. It’s hard to imagine that Mr. Trump doesn’t know this as well. The precedent of this action – that Trump can authorize an assassination that could potentially end in hundreds of deaths from the comfort of his Mar-a-Lago home, with little more justification on his part than a tweet – is at best problematic and at worst unconstitutional.