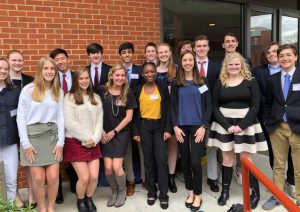 This year, more Pace underclassmen than ever before participated in the annual Atlanta Model Arab League (MAL), hosted at The Marist School Jan. 16-17. The conference is typically filled with history teacher Helen Smith’s AP Comparative Politics students, who are required to attend at least one model by Ms. Smith. As the Model United Nations (MUN) program has grown at Pace, so has the number of seniors who participate in several conferences over the course of their senior year, opening up several spots for MAL. This also means that many freshmen and other MUN rookies were able to participate and get some experience at a local conference.

MUN operates much the same way as MAL but is much larger in scope with a pool of 193 nations compared with MAL’s 22 League of Arab States nations. This means that even though committees at MAL worked the same way as a typical MUN General Assembly committee, they are only about 1/10th of the size of a potential MUN committee. Here, delegates are truly able to show off their knowledge and practice speaking in front of a smaller group, taking away some of the stress and nerves that a giant committee may bring to newer delegates.

As always, preparation time for the conference was short, and the entire group was only able to have one Sunday afternoon meeting. Because of the timing, delegates representing the nations of Somalia and Qatar had to work extra hard to finish their research and position papers. However, students finished their papers with plenty of time, and for history teacher Helen Smith’s AP Comp Pol students, these papers, as well as their participation in the conference, were graded as a class assessment.

Each year, Ms. Smith makes sure that her Comp Pol class is learning about Iran at the same time that students are preparing for MAL. This ensures that students not only understand Iran’s history but also the dynamic with surrounding nations that are represented in the League of Arab States.

Even though there wasn’t much time to prepare, most delegates didn’t mind. “Research for a model can often take you down rabbit holes, and it’s never possible to know everything, even about one topic,” said senior Robert Cushman. “That’s the beauty of it. It allows you to learn about topics you may have not known even existed.”

For new delegates especially, everyone learned a lot of new information about the Middle East, as well as speaking and research skills. “Although I didn’t really speak at all, I learned a lot and had a ton of fun meeting the other delegates and learning about issues going on in Palestine,” said sophomore rookie Alex Karamanolis.

Led by student MUN board members Leah Favero and Kargil Behl, who are sophomores, as well as Michael Fu, a junior, the 19 participating students spoke well and worked with delegates from other local high schools to create resolutions that would solve issues ranging from trade disputes between Saudi Arabia and Qatar to mitigating conflict within the Arab League.

Consistent with previous MAL participation, Pace delegates represented the school well, bringing home three individual awards as well as a delegation award. Sophomore Cole Kaplan (paired with senior and AP Comparative Politics student Alex Noel), received an honorable mention for his position as Somalia in the Committee on Political Affairs. Fu and Favero, along with Fu’s partner, freshman Belle Devine, and Favero’s partner Cushman, were each awarded Outstanding Delegate awards for their representation of Somalia in the Environmental Affairs Committee and Joint Defense Committee, respectively. Lastly, the Somali Delegation was recognized for their work with an Honorable Delegation Award.

For students who have been cautious about participating in the MUN program at Pace, local conferences such as MAL are a great starting point, according to several students. “Even though Ms. Smith and the thought of public speaking are really scary, it’s not all that bad and I encourage other people to try Model Arab League out,” said Karamanolis.