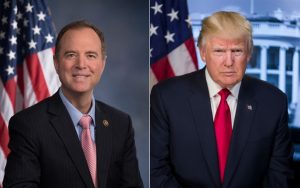 Adam Schiff (left) and Donald Trump have been at each others throats throughout the impeachment proceedings. Photos: Flickr and Wikipedia Commons

First, the Russian collusion, then Stormy Daniels, and now a Ukrainian hoax. In the words of Senator Lindsay Graham, “this the most unethical sham I have seen in my time in politics.” The Ukrainian hoax stems from alleged phone calls and conversations in which President Trump pressured Ukrainian President Volodymyr Zelensky to investigate Joe Biden’s son, Hunter Biden. The younger Biden was a board member at a Ukrainian gas company, Burisma, which came under fire due to corruption within its higher-level officials.

As a result, Trump allegedly wants these allegations to be further investigated in order to stain Joe Biden and damage his campaign. The liberal wing of our government, that has been itching to find some event that will end his term prematurely, jumped on the opportunity when this request was leaked and called it a “quid pro quo” (a favor or advantage granted in return for something). This, under law, is grounds for impeachment and therefore achieves the liberal agenda of disgracing Trump and conservatives.

Once these phone transcripts were released, multiple state department employees were called to testify against Trump, providing damning testimony that helped the Democrat’s cause. One of these former employees is the former U.S. Ambassador to Ukraine, Marie Yovanovitch, whose parents and grandparents immigrated to America from their native home of Ukraine.

President Trump, however, recalled her, and in November she stood in front of the House intelligence committee testifying against him. In the middle of the hours-long testimony, Trump sent a flurry of tweets attacking Yovanovitch. Seeing this, people supporting Trump’s impeachment immediately called this witness tampering which is another felony that can be charged. Trump, however, claims free speech allows him to say these things, and he does have a point: if Yovanovitch was so sure of her testimony, why did she say that his tweet was “very intimidating?”

Yet another fishy thing about this impeachment is that everything has been made so public. The committees have employed this tactic in the past when they publicized the Brett Kavanaugh hearings for the U.S. Supreme Court as well. However, because of their transparency, it may put the Democratic party at a disadvantage.

As witness after witness testifies, with no clear evidence of bribery, treason or a quid pro quo, the general public will begin to lose interest. Their interest is one of, if not the biggest, weapon for the Democrats’ impeachment inquiries. The more the public watches, the more their billion-dollar media outlets can spin the hearings in a way that makes it seem like there is some sort of evidence. This allows for even more attacks on Trump’s character, attempting to remove him from office before the end of his term and to turn people’s opinion for the 2020 election.

Weeks of testimony have been broadcast live across the entire country through media outlets that control the narrative. If you look at CNN, the message is that Trump will be impeached any day now while Fox assures its viewers that Trump is safe. The left wants to twist the truth saying that Trump has very close relations with Russia. With no evidence of collusion, the Democratic Party looks elsewhere to show that Trump is cozying up to foreign dignitaries – a national security issue for the country – according to them.

Ironically, after spending so much time accusing Trump of cooperation with foreign countries that pose a threat to the U.S., the left failed to mention that Hillary Clinton’s allies enlisted Ukrainian officials to dig up dirt on Trump during the campaign, according a Politico investigation.

Even if Trump is impeached by the House, it will not necessarily be the end of his presidency. Just because a president is impeached does not mean he has to leave office. If the House votes to impeach, the Senate must then try President Trump with Chief Justice John Roberts presiding over the trial. Two-thirds of a Republican-dominated Senate would then have to find President Trump guilty before he would be forced to step down.

This simply will not happen, and the Democratic Party understands this. Nevertheless, the left continues in their efforts to tear down Trump and grow their anti-Trump supporters until the true end of his time in office.