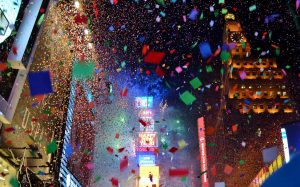 The ball drop, an annual tradition in Times Square in New York City, lowers as the time nears midnight on Dec. 31, 2013. Photo: gigi_nyc on flickr.com

No, 2020 is technically not the start of a new decade. While the answer to when the new decade begins will vary depending on who you ask, sources such as NASA and the Farmers’ Almanac state that Jan. 1, 2021 will begin the new decade. CNN reported that NASA settled a similar debate back in 1999 when the NASA Earth Observatory declared the new millennium would start in 2001 rather than 2000.

The official calendar used throughout most of the world is the Gregorian calendar, also known as the revised Julian calendar. On this calendar, the common era begins with year one, bypassing year zero. Due to the absence of a year zero, the first year is completed at the end of year one, not at the start. Based on this logic, the decade will end on Dec. 31, 2020, after a full ten years.

Upper school history teacher and counting centuries expert Emily Stevens has a firm opinion on the topic. “I mean, on the revised Julian Calendar it’s not a new decade, so there you go,” said Ms. Stevens. “If they had started with year zero it would have been different.” Sophomore Morgan Neill agrees with Ms. Stevens. “No, it is not a new decade,” said Neill. “There is no year zero, each decade is from year one to 10, so the new decade starts in 2021.”

Not everyone agrees that the new decade should officially begin in 2021. In a recent YouGov survey conducted for NPR, 64% of Americans believe that the new decade will last from Jan. 1, 2020 to Dec. 31, 2029. In pop culture, decades are perceived in even groups of ten.

Psychologists call this phenomenon the “round number bias.” People prefer to end decades and centuries with even numbers, so it seems more climactic. Freshman Ella Berman is a follower of this thinking. “Yes, it is a new decade because 2020 ends in a zero, signifying that it has been ten years since the last decade,” she said. Junior Tommy Assaf agrees with Berman. “Sports wise it is definitely a new decade because ESPN put out their biggest moments of sports this decade,” he said. “Due to everyone thinking it is a new decade, I think we should call it a new one. It also makes everything more exciting.”

There is no set definition of a decade other than a time period of ten years. This means the debate of whether 2020 or 2021 begins the new decade is left up to interpretation.