Fires Ravage Australia; What You Can Do to Help 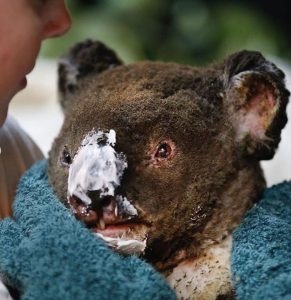 According to earth.co, a third of the koala population in New South Wales have been killed. Due to their slow movement, it is difficult for koalas to escape the fires. Photo: Earth Instagram

Over the past few weeks, news stations and social media sources have been filled with headlines regarding the ravaging fires that have been making their way through Australia. These fires started last July and have since spread across the country. Although wildfires are not uncommon in Australia, these recent fires are the worst that have been seen in decades, and they show no signs of ending soon.

BBC News says that New South Wales and Victoria have been hit the hardest so far as large fires on their borders merged to create a “mega blaze.” However, there have been fires in every Australian state, and the entire continent is facing dangers. New South Wales declared a state of emergency, evacuating citizens and animals this month. Flames have pillaged national parks, bushland and even suburbs outside of major cities Melbourne and Sydney.

Many are questioning what caused the fires. The extremely dry and hot Australian summer and natural causes, like lightning, are often to blame for wildfires. However, the New South Wales police department has found people guilty as well. Thus far, 24 people have been charged for deliberately starting fires.

These fires are nothing new, as the worst recorded fire season in Australian history was in 2009, killing 173 people in Victoria. However, due to extremely dry conditions, the fires have only gained momentum. Last December, Australia hit her highest nationwide temperature ever, with areas reaching 120 degrees Fahrenheit. Due to climate change, the fires are only worsening; they are also emitting dangerous greenhouse gases that are further destroying the environment.

In total, 17.9 million acres have burned in Australia over these past six months. To put that into perspective, in 2019, the California wildfires destroyed about 247,000 acres of land. The federal and state governments are working to fight the fires, and even have used military assistance to help evacuate people and search for those who have gone missing.

With the continent engrossed by fires, thousands of people were forced to evacuate their homes and millions of animals have perished. A total of 24 people have died in Australia thus far, including volunteer firefighters. Although firefighters are working to put out the flames, the number of fatalities is likely to rise. Some experts, like University of Sydney professor Chris Dickman, are claiming that nearly half a billion animals have been wiped out so far, with expectations that the number will continue to soar and potentially reach 1 billion nationwide. “It’s a monstrous event in terms of geography and the number of individual animals affected,” professor Dickman told CBS News.

CNN spoke to Federal Environment Minister Sussan Ley who claimed that nearly a third of koalas in New South Wales alone have been killed by fire, with their habitats also being destroyed. Not only are koalas in danger; kangaroos, wallabies, frogs and birds are also facing extreme dangers due to destruction of environments.

Although the fires appear to be worsening, people across the world are trying to protect Australia like first responders, environmentalists and common people. There are also many people worldwide who have donated to various causes, hoping that their dollars might be able to help. The largest Facebook campaign ever has already raised more than $30 million dollars for New South Wales Rural Fire Service and Brigades. Australian natives and actors Nicole Kidman, Chris Hemsworth and Margot Robbie have also spoken out about the devastation and pledged millions of dollars to help.

The New York Times recommends donating to certain organizations that are helping the efforts. The Australian Red Cross is accepting donations to its Disaster Relief and Recovery Fund. The Red Cross is helping those displaced from their homes by supporting them financially and by providing them with shelters and recovery centers. The World Wildlife Fund is accepting donations which will go to medical treatment for the hundreds of koalas that have faced injury and planting trees. As firefighters are facing the flames first hand, the NSW Rural Fire Service is also asking for donations that will go to emergency efforts and nonemergency community work.

Top photo: Nearly 200 fires are burning across Australia, and the death toll has climbed to 24 people. Photo: Earth.co on Instagram