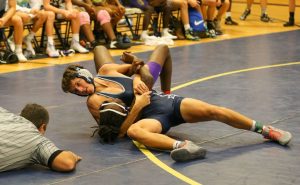 Beginning the season after one of varsity wrestling’s most productive offseasons to date, there is a lot of excitement about the future possibilities. “This year’s group has been more motivated in the offseason than just about any team I have had since I’ve been at Pace,” said head coach Gus Whyte. “They are really a group of self-starters who have been driven to get better.” Despite not fulfilling all the weight class requirements, the wrestlers are optimistic as to what the season has to offer.

This year’s team is dominated by 10 sophomores. Sophomore Sam Howe is looking ahead to the end of the season when he hopes that his hard work will pay off. “I am looking forward to the state tournament in February because I think I can do something there – pretty good for Pace standards.” “We are all just looking forward to the postseason,” agreed sophomore Thomas Wells.

Due to the length of the football season, a lot of the upper weight classes could not be filled for the first matches of the season, likely contributing to their three losses to open the season. However, Coach Whyte is determined to focus on how the team can improve. “Right now the team aspect is having a good team cohesion,” he said. “We want to have a team that people want to be on, that people have a good time on and that everyone gets better on.”

Wrestling is different than many sports in that it is a “combination of an individual sport within a team sport,” said Coach Whyte. ”There are individual goals about how you want to perform, and then there is the team aspect of can we be competitive as a team and can we win dual matches as a team.”

“You can’t bank on somebody else. If you lose it’s your fault, and if you win it’s all you,” said Howe on the individual aspect. “You can’t blame it on anyone else.”

One of the things Coach Whyte is most excited for is the mutual commitment from all the wrestlers. “We are a smaller team, but the guys that are out there are really working hard,” he said. “I don’t think we are going to be a team where we have one dominant guy. Everyone is making the same strides.”

The team added a new community coach this year named Devin Billings who was a wrestler in high school and played football in college. “Mr. Stevens and I have coached for the past several years, but now we have another guy to not only wrestle with our guys, but to show technique and to bring his own set of expertise,” said Coach Whyte.

As of press time on Dec. 9, the team is 5-8. The team will compete at the Westminster Duals at Westminster on Dec. 14 beginning at 9 a.m.