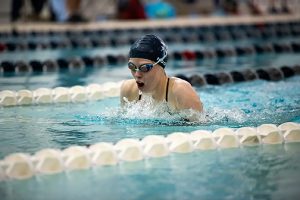 As winter sports get underway, the Pace varsity swimming and diving squad is back in action and has already competed in multiple meets. Coming off a successful 2018-19 season with three individual state championships (Charlie Kaye ’19 with two and junior Lizzy Kaye with one), many state qualifiers and a solid 25th place finish out of 107 teams, the group looks optimistically on this season.

So far, the team has clashed in meets with Landmark Christian, Atlanta International School (AIS), Lovett and Loganville, all of which have been in the Pace natatorium. The girls won all three meets and the boys have won two, only losing to Lovett. Many swimmers throughout all grades have been performing to their potential, and the team achieved 52 personal bests at their Dec. 5 meet versus Pope High School.

Coming into their first high school season, freshman boys Carter Freudenstein and Barrett Hight have contributed to the success of relays, as well as competing impeccably as individuals. Freudenstein has already earned a few first place finishes along with a couple second places as well. His main events are the freestyle events such as the 50 and 100 meters, for which he has state qualifying times, but he also stands out in the individual medley. Hight also swims the individual medley and in the second meet got a state qualifying time for the 100 meter back. For the girls, freshmen Iowa Vance and Marisa Sapre have accumulated a fair amount of points as well.

The team has 10 returning seniors who are using their veteran skills and leadership to flourish as a cohesive unit. “The team looks promising,” said senior captain Jason Rosenbloum. “With new incoming freshmen and seniors such as Dillon Carrol, I think we have a great team. As a team, I hope we break a few relay records for the school.”

Exemplifying teamwork, the seniors still have individual goals for their last year of high school swimming. Senior girls Erin Hood and Meghan McMillin have had a strong start to the season.

Hood has already reached five state qualifying times and broken a record set by Grace Ferry ‘16 (now a swimmer at the University of Pennsylvania) in the 100 fly. McMillin has also finished first in many heats this season, specifically the 50 and 100 frees.

Along with the swimmers, the team’s few divers have also had a strong start. So far, sophomore Kate Grabowski has two second place finishes and a first place finish under her belt. Pace diving legend Lizzy Kaye is coming off a season where she broke the school’s 6 and 11 dive records and won a state title. She has also qualified for the state meet once again.

“Personally, I hope to have another successful season,” said Kaye. “I’ve got a couple new dives I’m trying out this year.” Kaye went to the USA Junior National Championships as well, and placed eighth in the 3-meter synchronized diving final along with a semifinal finish in both the platform and springboard dives.

“The social aspect of swimming is one of the best parts of the sport,” said Rosenbloum. “During practice, people who would not usually talk get to know one another, which makes the team into one big group rather than multiple small cliques.” The team usually goes to dinner after meets as well. “We always try to go out and eat as a team to celebrate,” said Kaye.