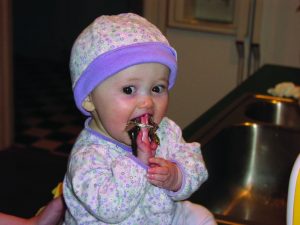 Senior Zoie Freier as a baby is a reminder of just how far these 18-year-olds have come. Photo: Zoie Freier

Seniors reflect on passing the milestone of turning 18 years old

To most young people, the age of 18 years is an idea that has loomed large as the most anticipated or most dreaded age to turn. But that’s no surprise – turning 18 comes with a slew of added legal abilities such as being able to vote, serve on a jury, marry, enter into contracts, buy and sell property, control your own medical treatment, and being able to move out – which could be good or bad depending on who you are. However, is 18 really all it’s cracked up to be?

Most seniors seemed to have the same response: No. “I think I looked at 16 as, like, the big thing. I never really thought about 18, but I definitely thought that 18 would be bigger,” said Claire Wierman. “I thought I would feel older, I would feel like an adult, but I really don’t.” Other seniors shared this sentiment. “Eighteen is like, ‘Oh you can vote, you’re an adult.’ It seems like a big milestone but it’s really not,” said Zoie Freier.

Even though turning 18 may be a letdown, the ability to vote is a big deal to many. Senior Molly Buffenbarger took AP Comparative Politics this year in order to learn more about the world before she voted.

“Being able to vote is not only a responsibility to ourselves but also to our generation,” said Wierman. “I think our generation is very different than those who are voting currently and I think that we have the power to change it, even though that sounds cheesy.”

Some seniors, including Paul Louis Biondi, have already voted. “We voted at 7:30 on a Sunday morning. It was completely normal, there was nothing out of the ordinary, and it was fun getting the little sticker afterward,” he said. “You’re just like, ‘hey, I participated in an election.’”

Little things, like scheduling one’s own appointments at the doctor, and having to take your ID out at the airport were signs to these seniors that they were getting older. The freedom, especially the legal freedom that comes with being 18, is a much bigger deal. “I told my Mom I wanted to get a tattoo over the summer because I was 18 and then she told me to ‘make sure your dad’s OK with it but I guess I can’t stop you,'” said Buffenbarger.

However, not all of these freedoms were positive. Biondi was put in a unique situation with his dual citizenship in France and the United States. “I still have to register for the draft,” he said. “If I don’t register within a month of my birthday, I can get fined and tried for treason or something. Because of my dual citizenship, if one country goes to war against the other, either country could call me treasonous and I could go to jail.”

Many seniors weren’t sure if they felt any older, but one thing was for certain: they felt prepared for the future. “I’m definitely prepared educationally, but as for real life experiences, I definitely gained a lot more of that this year,” said Wierman. “From being more aware of what’s going on in the world, to getting groceries and picking up stuff for dinner, I feel like I’m becoming more of an adult.”

Freier shared somewhat different feelings. “I feel like I’m prepared for college but not for life experiences… there’s no way I’m prepared to do taxes,” she said. “The college process also has made me prepared to figure out what I want for life.”

To most, 18 hasn’t been the biggest moment of their lives. Instead of staying in the past, seniors choose to look towards the future with optimism, with the age of 18 only another stepping stone towards their goals.

As Biondi put it, “The implications of what it means to be 18 is what’s most exciting. You probably have made it through the hardest part of high school and soon you’ll be going to college, where you can do what you love.”