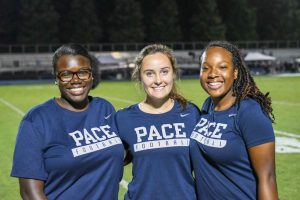 When watching a Pace sport, fans focus on the players on the court or field who take shots, score touchdowns or hit home runs. What goes on behind the scenes of these sports often goes unnoticed. Team managers are the influential forces behind the teams who not only help the athletes keep track of their schedules, but also allow for players to execute in games and matches.

The managers have a personal interest in each player’s achievements and take pride in the team’s performance. From football to soccer, Pace sports have student-managers who work alongside their peers with the goal of helping the team win.

There are many reasons why students decide to take on the position of team manager. Some students, like senior Mary Lawson Bring, have a passion for watching certain sports and want to be a part of the team in any way they can. Bring was the manager of the varsity football team this year along with fellow seniors Brianna Thomas and Sydney Thomas.

She has worked alongside the team since her sophomore year, fulfilling duties of keeping the players hydrated, making sure the clock is running properly, and setting up the field before practices and games. “I grew up watching football and going to UGA games, and I wanted to get involved in that just because I love football,” said Bring.  “I was never doing a fall sport and I thought it would be something cool to be a part of during that season.”

Being a manager is a major commitment. Managers have to go to every practice and game during the regular season. Also, for fall sports, the managers have to work at practices in the summer when the season starts for the players. “At first having to go to practices towards the end of summer sounded horrible to me, but it honestly made coming to school easier on the first day,” said Bring. “I learned to really appreciate it and realized how important it was for me to be there keeping the guys hydrated during the summer.”

For other sports, like in the winter or spring, being a manager might mean that one would have to stay in town for Thanksgiving, the winter holidays or spring break.

Becoming a manager can mean igniting former passions. For senior Kennedy Tate, who is one of the girls varsity basketball managers alongside freshman Avery Abram, being a manager has made her excited to become more involved in her Pace community by working with a sport that she has had experience playing in the past.

Having played basketball for eight years of her life but stopping her freshman year, Tate knows the sport and has always loved the positive energy that comes with it. “I really appreciate how our team has already created a bond that is as tight as any family,” said Tate. “We always say that we are ‘like a fist,’ and we truly are.”

The time and effort pays off when the managers are able to see their teams grow. “Although managing can take anywhere from 10 to 14 hours per week, I love doing it,” said Tate. “My goal is to get the players amped up, encouraged, hydrated and ready for a long season.”

Other students decide to become a manager just because they have free time and want to do something exciting. The wrestling team has eight managers: seniors Sophie Lettes, Mae Shippen and Francesca Vaneri, and sophomores Allie Campbell, Megan Eghtedari, Sarah Elizabeth Hayden, Maggie Pope and Anna Rosenbloum.

Many of these girls decided to start managing the team to find out more about a sport they were unfamiliar with. “I wanted to take on this role so I could learn about wrestling, as my brother really loves the sport,” said Shippen. “It is also a really interesting sport to watch.”

Another positive that comes from becoming a manager is the opportunity that it can open up in the future. Many Pace graduates who worked alongside teams during high school either studied subjects like sports marketing or sports medicine in college or became a bigger part of their college’s athletic programs. Alumna Carly Silverstein ‘17, who is in her junior year at the University of Georgia, was a football manager throughout her days at Pace. She now works in the UGA football recruiting department and is majoring in sports management and psychology.