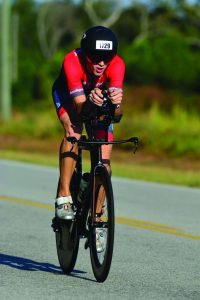 Most high schoolers spend their time bouncing between school, home and team practices. But senior Ben Tolliday has chosen to pursue a very different and incredibly rigorous path – IRONMAN training.

IRONMAN triathlons are a series of long-distance triathlon races that take place all over the world. They involve a 2.4 mile swim followed by a 112 mile bike ride and, finally, a full marathon. These races are widely regarded as being some of the most physically grueling and difficult single-day athletic events in the world. The average IRONMAN finishing time is 12 hours and 35 minutes.

As a result of the extreme physical demands of this race, very few people complete IRONMAN triathlons. For most people, the thought of completing a race like this sounds impossible. But Tolliday hopes to become one of about 75,000 people each year who complete these feats of strength and endurance.

Tolliday first discovered the IRONMAN race by chance about a year ago. “I quit baseball and needed to find something to do because I couldn’t sit around all the time,” said Tolliday. “I stumbled upon a YouTube video of someone doing an IRONMAN and suddenly became interested. So, I did some research about what exactly it consisted of and decided I was going to give it a try. I found a coach and started training right away.”

The training to prepare for such intense events takes up a large part of Tolliday’s life, with an average week consisting of around 15 hours of training. “I will usually do two workouts a day,” said Tolliday. “Sometimes it will be a swim in the morning and a bike after school, or a bike and a run after school, etc. The hardest part by far is waking up at 5:45 some days to go and swim in a freezing pool for an hour and a half before going to school.”

Naturally, the physical rigor of the training is grueling, and it requires incredible motivation. “With triathlon and especially IRONMAN, I feel like you are either fully committed or you aren’t,” said Tolliday. “Some people train to simply complete a race like this and are satisfied to cross the finish line, but I know that wouldn’t satisfy me. I need to feel that I have done my best, and I want to race the races instead of just making it to the finish.”

Athletes are frequently reminded that it is just as important to be mentally strong as it is to be physically strong. “My training has made me more mentally strong because… when you are doing very tough workouts it is very easy to simply stop and quit, but it takes mental strength to keep going and to shake off all the negative thoughts,” said Tolliday.

It can be particularly difficult to maintain one’s focus and motivation during a race, which lasts for hours on end with no break. Tolliday handles the monotony in a couple of different ways. “I often start singing or just speaking to myself because it gets pretty lonely when you are out there by yourself. I just try to keep my mind off of any negative thoughts and just think about how much fun I am having.”

Despite having started his training just over a year ago, Tolliday has already risen through the rankings. In his latest half IRONMAN in Augusta, Tolliday placed first in his age group out of 70 people, and was 20th overall out of 2651 athletes, including professional athletes, and third overall not including the pros. He is also in the top 1% of all athletes in his age group for the 70.3 mile distance in 2019.

Whatever awaits in the coming year, Tolliday is certain that he will continue running triathlons for the long term. “Triathlons are something that you can do for the rest of your life,” he said. “In one of my previous races there have been people in their 80s racing. I don’t know if my body will be able to last that long, but as of right now I plan to keep doing triathlons and IRONMAN distance races until my body says no more.”