PAALS Club Takes Action for a Personal Cause 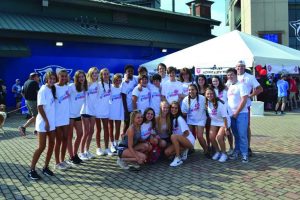 The PAALS club participates in the March Against ALS on Sept. 19. Photo: Klara Andra-Thomas

Twelve years ago, Klara’s father was diagnosed with ALS (also known as Lou Gehrig’s disease), a progressive neurodegenerative disease in which the muscles in the patient’s body weaken until they can no longer walk or speak. “The hardest part for me to come to terms with my dad’s disease was the hopelessness,” said Andra-Thomas. “There’s no cure, so you feel like all you can do is sit and wait as the years pass. The club was a way for me to feel like I could help others and also feel like I was doing something.”

Andra-Thomas launched the club at the start of her junior year with the help of classmates Lucy Ferry and Emma Shelton. They had three main goals in mind: fundraising, participating in the Walk Against ALS and spreading awareness of the effects of the disease on its victims and their family members. “The money we raise goes towards research for a cure and to support families and help cover some of the medical bills,” says Andra-Thomas.

Additionally, Andra-Thomas has reached out as a babysitter for kids whose parents have ALS. “With a disease like ALS, it can be hard to do simple things like finding a babysitter because the needs of the family and the environment are really unique. I also wanted to be able to support kids, and be someone who they can talk to.”

So far, Andra-Thomas has led the club to the annual Walk Against ALS twice and has raised thousands of dollars for the fight against ALS. “I’m really proud of the work we’ve done and the money we’ve raised, but one of my favorite memories is just the morning of the walk when we saw how many of our classmates and friends had taken the time to come join us,” said Shelton.

For the leaders, the most important part of the club has been seeing how the Pace community came together to fight a disease that had impacted members of its community. “It was just really amazing how people understood the significance of this club, whether that be by way of donating, coming out to the walk or just showing up to our meetings,” said Ferry.

Although the current leaders will be graduating in May, they have big plans for the following years. One of these includes passing down leadership within the family. “My brother, Martin, is going to be a freshman next year, and he’s going to continue it once I’m gone along with other upperclassmen leaders,” said Andra-Thomas. “I consider founding PAALS the most important thing I did during my time at Pace, and it means a lot to me to know that this work is going to be in the hands of someone who understands its significance and will take the fight as personally as I do.”