Out for the Season: Injuries Plague Student Athletes 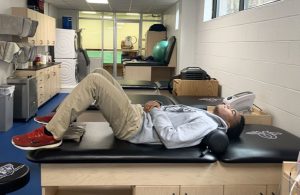 Every year, millions of teenagers take part in high school sports. According to U.S. News & World Report, nearly 55.5% of high schoolers participate in sports. Although athletics enable students to stay active, make new friends and learn life lessons, there is also the risk of injury.

Walking around any high school, one is likely to spot students wearing braces or casts or walking on crutches. Whether due to a stress fracture, concussion or torn ACL, students often find themselves hurt, which can lead to loss of playing time in games or even time away from school. The U.S. Centers for Disease Control estimates that high school athletes account for over 2 million injuries and 500,000 doctor visits in the U.S. each year.

All of these injuries raise a serious question: what toll do sports actually take on young people’s bodies? In high school, many students start training strenuously to perfect their techniques. Although practicing for multiple hours every day helps athletes to become stronger, it can also have serious effects on their health.

At a school like Pace where 80% of high school students play at least one sport, the seasons are long and tiring. By the end of each season, or sometimes even before they are over, the players are worn down and many times walking away with stress fractures.

With many kids beginning to specialize in only one sport, the risks for overuse injuries increase. Dr. Neeru Jayanthi, the Director of Sports Medicine Research and Education at Emory Healthcare in the Atlanta area, followed 1,200 young athletes in Chicago for three years.

According to espn.com, Dr. Jayanthi found that the athletes who specialized in a single sport were at a much greater risk for injuries, mostly those of bones and ligaments. “Young athletes who were injured tended to have more intense specialized training in one sport,” said Dr. Jayanthi. “We should be cautious about intense specialization in one sport before and during adolescence.”

However, these athletes are not the only ones at risk, as anyone can suffer from random, freak injuries or just general overstress due to activity. Junior Lily Koch suffered a torn ACL during last year’s lacrosse season. “Tearing my ACL was very, very painful and the recovery process was long and tedious,” said Koch. “I was unable to play sports for a year.”

Senior Hayden Sample also suffered from a serious knee injury in her gymnastics season, which required surgery. “It was isolating because you don’t feel close to your teammates when you can’t condition with them,” said Sample. “I am not able to execute at the same level of difficulty that I used to be able to. However, attitude and self advocacy are everything.”

Although athletes can suffer from injuries, they also learn to become stronger after dealing with these struggles. “During my resting time, I have gotten a lot stronger, and I am excited to get back into things and see what I can do,” said Koch.

Nineteen students from the Class of 2019 went on to play sports in college. Being a college-level athlete is demanding, even before the students enter the playing arena at their new universities. Students who want to pursue athletics in college have to work day and night in high school to get on the radar of recruiters. However, there is danger in this, as many athletes begin to overwork their bodies and find themselves fatigued early on. “Kids are broken by the time they get to college,” said Dr. Jayanthi in the ESPN piece.

In playing a sport, there are precautionary measures that athletes can take in order to maximize their performance in a safe way. The American Academy of Pediatrics (AAP) offers many suggestions to prevent injury for athletes. However, the point the academy stresses the most is how students must take breaks. AAP claims that a healthy exercise schedule includes taking at least one day off per week and one month off per year to allow the body to recover.

The academy also recommends wearing the right protective gear, strengthening each muscle in the body through conditioning – staying away from singling out specific body parts – and avoiding heat-related illnesses by drinking fluids before, during and after practices and games.

In a 2019 August press conference, former quarterback of the Indianapolis Colts Andrew Luck announced that after years of pain and injury, he had decided to stop playing football altogether. “This is not an easy decision,” said the 30-year-old. “Honestly, it’s the hardest decision of my life. But it is the right decision for me. For the last four years or so, I’ve been in this cycle of injury, pain, rehab, injury, pain, rehab, and it’s been unceasing, unrelenting, both in-season and offseason, and I felt stuck in it. The only way I see out is to no longer play football.”

Not all athletes have to go to this extreme of quitting their sport entirely, but students should remain aware of how they are feeling and to what extent they are pushing themselves. In an article from TeensHealth, Dr. Mary L. Gavin, a children’s health specialist at DuPont Hospital in Wilmington, Delaware, claims that no matter the degree of injury, “if you think you’ve been injured, pull yourself out the game or stop doing your activity or workout. Let a coach or parent know what happened in case you need to see a doctor.”