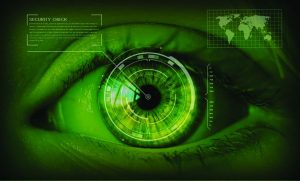 Companies, such as the airport security system Clear, are scanning peoples’ irises and utilizing fingerprints for identification purposes. Photo: LibreOffice

This fall, FaceApp blew up the internet. FaceApp is a smartphone app that transforms peoples’ appearances through artificial intelligence. Millions of users across the globe became obsessed with scanning their faces in order to see their older or younger selves.

Although it may seem harmless, there is an unknown and hidden danger to FaceApp. What many don’t realize is that a lot more than just one’s face is exposed when using this app. It can expose information about one’s identity and lead to privacy issues for anyone who has downloaded the app.

The concern started when rumors began circulating that the Russian company that owned FaceApp could be misusing photos and private information, given their vague privacy policy. According to technology firm Impact, all the data from FaceApp goes through the company, and people feared that Russian hackers would be able to access their personal information.

When first getting the app, users must grant access to Siri and all of the photos in their camera roll. Once this happens, people are essentially giving Wireless Lab OOO, the company that created FaceApp, permission to view all of their pictures.

As an article in Forbes stated, “even when you are not using it, it is using you.” Although it may seem like the app can only gain access to the photos that one uploads into FaceApp, there is still a major privacy risk. Private information, such as credit card numbers and purchase history, could be exposed simply by scanning one’s face into this app.

FaceApp went live in 2017 and since then has gathered over 80 million users. Celebrities, such as The Jonas Brothers and Dwayne “The Rock” Johnson, began a FaceApp challenge, posting and comparing their changed faces. This drastically increased the number of users, as social influencers encouraged their followers to join in on the fun.

What they failed to realize was that there is much more to the app than just transforming faces. Through accessing these photos, it is easy for the owners of FaceApp to figure out one’s identity. As stated by The Atlantic, most data that runs through apps is passed through the government.

According to Robert Siciliano, a security awareness expert at Safr.Me in a MarketWatch article, “any app gathering data points that could lead to facial recognition should be of concern, especially when it’s being used by government agencies.”

FaceApp is just one of the many technological innovations that pose a privacy threat. Social media platforms, such as Instagram and Facebook, have had similar issues. According to USA Today, Facebook was fined roughly $5 billion due to failure to protect users’ data.

Over the past year, Instagram has made it harder for users to maintain privacy on the platform. The company has upgraded the app, allowing users’ followers to see when they are active on Instagram and notifying users when someone is typing a direct message to them.

Not only do social media platforms pose as a threat, but even the new face identification feature on iPhones is dangerous. Scanning one’s face into their phone allows the user to not only unlock it, but they can also use it to buy apps in the App Store and authorize any purchases made through Apple Pay.

According to Forbes, a group of researchers tested how easily they could hack into someone’s Face ID. It took the group of hackers only two minutes to log into peoples’ phones. As Threatpost, a news site that reports information regarding security of professionals around the world, stated, “Liveness detection has become the Achilles’ heel of biometric authentication security.” The hackers only had to use spectacles and tape to hack into an iPhone user’s device.

Other complaints about iPhones and other smartphone devices have surfaced. People claim that the phones are listening in on their conversations through Siri. Individuals have had conversations with other people and the next day will see an advertisement on Instagram or receive a spam email about the same topic they were discussing the day before.

A reporter from Vice, a digital media company, put this to the test. Twice a day for five days he would say specific things around his phone, such as “going back to the university.” He reported that advertisements “came literally overnight,” with ads for mid-semester college courses. People across the globe now cover the camera on their laptops because, according to USA Today, it gives the government and the company that manufactures the computer a way to spy on people through these devices.

Beyond hand-held devices, biometrics are expanding their consumer reach to airports and stadiums. The security screening company Clear is now at over 60 airports and other venues, allowing people to speed through security lines using their fingerprints and irises as identification.

Clear, which is certified by the Department of Homeland Security, requires new members to put in their contact information, face id, financial information, and additional personal details. Members pay a $15 monthly fee for the screening service. According to NBC News, as more and more people begin to use Clear, it is only a matter of time before severe privacy issues surface.

Although it may be trendy and entertaining, according to the experts, FaceApp and other apps and services that use biometrics should be used with caution. It is better to avoid the potential harms than to take the chance and risk one’s private information for a funny photo or a shorter security line at the airport.