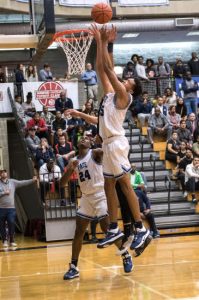 Junior Matthew Cleveland goes up for a rebound during a region matchup against Redan High School on Nov. 22. The Knights won 84-43. Photo: Fred Assaf

Storming in with a record of 8-2 as the team headed off to the Chicago Elite Classic tournament last weekend, Pace Academy’s varsity basketball team makes the spectacular seem routine. After a satisfactory season last year coming in as runner up region champions with a record of 20-9, varsity basketball has a newfound confidence this season with the addition of junior Matthew Cleveland.

Shooting guard Cleveland is new to Pace this year but has stepped right into a star role on the varsity team, leading in almost all of the offensive plays. According to 247Sports, Cleveland is “one of the best wing prospects in not only the state of Georgia, but the entire country.” He has received over 30 offers from colleges already, including Clemson, Florida State, University of Georgia, Georgia Tech, Louisville, Purdue, Stanford and the University of Virginia. He set big goals for the team as he strives to win region and be in a strong position before playoffs.

This will be junior Cole Middleton’s third year on varsity as a center. He has only been playing basketball for five years. He feels content with the team’s performance, but knows they still have a lot of work to do. “We have been playing well with our new additions but we still have to learn to play together as a family,” he said.

Currently, Cleveland, Middleton and fellow junior Madison Durr have been included on the Atlanta All-Metro High School Boys Watch List, published by the Atlanta Tipoff, indicating the high level of talent this season. In its Holiday Hoopsgiving Recap, 247Sports mentioned Durr as an “intriguing guard prospect,” calling him a “tough, scrappy guard that finds ways to impact the game.”

Senior Reign Watkins is the only player who remains from the Pace varsity basketball team that won back-to-back state championships in 2016 and 2017. “I understand that I am one of the few seniors, and I am ready to help my team with the experience I have,” he said.

With the arrival of head coach Sharman White last year, the team continues to play and compete at a high level. The Dec. 5 region win over Cedar Grove 74-49 marked Coach White’s 400th career win. The Atlanta Journal and Constitution’s Week 4 basketball rankings placed the Pace Knights at the number one spot in GHSA Class AAA.

“[You] can only imagine the great heights this team will reach this season,” said Middleton. The team plays Westminster at home tonight in a region matchup at 7 p.m.