Much Thought Goes into Providing Lunch at Pace 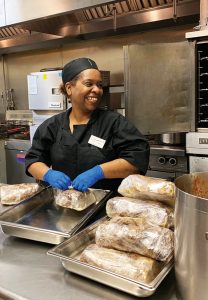 Behind every rodeo burger, taco and french fry in the Inman Center cafeteria there is a hard-working kitchen staff member who carefully plans, sources and cooks every meal. Not to mention the laborious cleanup process afterward.

Senior Food Service Director Mark Roman arrives at Pace around 5-5:30 a.m. and food production usually begins around 7:15 a.m. “Meals are planned out months in advance,” said Mr. Roman. “It’s based on what the population likes. We take some feedback from the student government.” Mr. Roman also hopes to get a food committee together so that students can voice their opinions and suggestions for lunches.

The cafeteria staff plans the daily menus with nutrition in mind. “We send them up to Baltimore, and Sage has a team of seven registered dietitians to ensure the meals are balanced,” said Mr. Roman. Sage Dining Services is an independent contractor that provides food service for Pace. An example of a Sage requirement for every meal is that there must be two vegetables with one being steamed.

In addition to nutrition, the cafeteria also tries to make much of the food accessible to students with allergies. Sophomore Allie Campbell has a gluten intolerance called celiac disease. “The cafeteria always has options which makes it super easy to maintain my gluten-free diet,” said Campbell. Pace also provides nut-free and vegetarian alternatives. “Just come see us if you have any concerns about cross-contamination and allergies,” said Mr. Roman.

All of Pace’s food is sourced locally when possible. “During the year we do try and get a lot from Georgia, Alabama, Florida and the Carolinas,” said Mr. Roman. Most of the meat and produce comes from these neighboring states.

The lower, middle and upper schools combined require about 200 pounds of meat per meal and about 60 pounds of vegetables. That 260 pounds of strictly meat and vegetables does not include all other food, including pasta, rice, salad, fruit or even the panini bar.

While students have so much variety available to them in the lunchroom, much of the prepared food is wasted. “Take what you are going to eat, not what you think you are going to eat,” advised Mr. Roman. The Upper School alone fills about three compost bins and two trash cans with food waste per day.

Beginning this year, the company CompostNow takes all of the cafeteria’s food waste off-campus to be composted. But despite all of the assemblies and friendly reminders, much of the waste in the compost bins is ruined by people tossing plastic wrappers into the bins.

In a recent Knightly News survey, upper school students were asked to estimate how much food waste the high school alone produces. Students estimated anywhere from 20% to 40% of the original weight. In reality, 47% is wasted. However, by using CompostNow, the Upper School was able to divert 3,065 pounds of waste from landfills, creating 306 pounds of compost in just one month.

After lunch, students often leave their table a mess for the cleaning staff to take care of, only adding time to the staff’s long days. However, “manners have never been a problem with Pace kids,” according to cafeteria staff member Kyanna Harris. “So continue to treat the staff as you do, but try to help us out by picking up stray cups and such.”