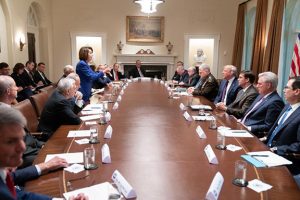 Speaker of the House of Representatives Nancy Pelosi interacts with President Donald Trump at a meeting at the White House. Photo: @SpeakerPelosi on Twitter

“No one is above the law,” said Speaker of the House of Representatives Nancy Pelosi. After months of speculation and discussion over the possibility of impeaching President Donald Trump, Pelosi announced a formal impeachment inquiry against President Trump in late September of this year. If this impeachment goes through, Trump would become just the third president in U.S. history to be formally impeached. (Andrew Johnson and Bill Clinton were impeached by the House but acquitted by the Senate; Richard Nixon resigned before the completion of the impeachment process.)

Although discussion of this possible impeachment began months ago, the final straw that led to Pelosi’s announcement was the initial whistleblower complaint that was centered around Trump’s involvement and phone calls with Ukrainian President Volodymyr Zelensky. The contents of this complaint mainly focus on concerns of a July 25th call with Zelensky, in which the U.S. President requested that Ukraine investigate the Biden family, specifically Hunter Biden, the son of former Vice President Joe Biden, who is currently running for the Democratic Presidential nomination.

The issue is this: Trump seemingly used his personal power and foreign actors to harm the presidential campaign of one of his competitors, which, in turn, would bolster his own campaign and increase the likelihood of his reelection.

Another issue highlighted in the complaint was the attempted cover-up of this Ukraine call by the Trump administration. According to the whistleblower complaint, the transcript of the phone call in question was removed from the electronic storage area where it would typically be kept in favor of moving the piece to a bin for classified information that would not be seen by Trump’s Cabinet members.

This raises concerns about the Trump administration’s involvement with other foreign nations, such as Russia, and just how little the public may know about how Trump has conducted himself in the Oval Office. There is no way for the public to know when Trump erases transcripts of his calls and interactions with other foreign or domestic actors, which puts the nation and our democracy in danger.

Since this initial complaint was filed in mid-August of this year, there have been several developments. On Sept. 24, Pelosi announced the commencement of a formal impeachment inquiry into Trump’s actions relating to Ukraine. In early October, a second whistleblower complaint was released from a source that is even closer to the actual events that took place, which diminishes the argument made by some Republican officials that this accusation was simply “hearsay” and could not be corroborated by evidence.

The House Intelligence Committee held hearings, many of which added detail to events surrounding Trump’s impeachment. For a while, these hearings were held behind closed doors, but in mid-November Congress began to hold public hearings, which have clarified many of the details of the claims made against Trump.

With all of the public impeachment hearings that took place on Capitol Hill over the past month, it has become increasingly clear that Trump may be trying to hide his actions and may be lying about the nature of his relationship with Ukraine. However, this is not the only issue that arose during the hearings.

During former U.S. ambassador to Ukraine Marie Yovanovitch’s public hearing, Trump released a tweet attacking her diplomatic record and placing the blame on her for existing issues and unrest in Somalia, where she formerly served as a junior foreign service officer.

This tweet was mentioned later during Yovanovitch’s hearing by California Representative Adam Schiff, and according to NPR, this tweet specifically could add a new phrase to the articles of impeachment against Trump: witness intimidation.

Pelosi also began to mention Trump’s call with Zelensky as “bribery,” which makes it even more clear that some form of further action is necessary to evaluate the ethics that Trump has exhibited during his Presidency.

According to the Constitution, Presidents should be impeached in cases of “Treason, Bribery, or other high Crimes and Misdemeanors,” and with the widespread public support for Trump’s impeachment, which currently sits at around 49% and has previously hit 51%, as well as the Constitutional justification for his impeachment, the process of impeachment is necessary as a duty of Congress.

The House Judiciary Committee met on Monday to hear from lawyers for the Democrats and Republicans who made cases for and against the impeachment of President Trump. The committee will then vote on articles of impeachment, with a full vote by the House expected as early as next week.

If members of Congress truly believe that there is justification for impeachment, which a large portion clearly does, then it is their duty to act on the information that they are given. Our elected officials have chosen to call into question Trump’s actions, as well as the willingness of the White House to cover these actions up, and we must support this as a part of the American democratic process.

The power to declare impeachment was given to Congress by the Constitution and if Congress had not moved forward with a formal inquiry, their Constitutional duty would have been disregarded, which could have led to a constitutional crisis within the U.S. It should not matter whether or not it hurts the Democratic Party in the long run or the Republican Party and Trump Administration right now; it has to be done to preserve American democracy.