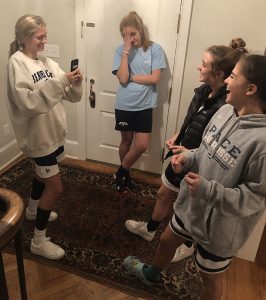 Have you noticed your friends filming themselves while dancing and lip-synching at school? Your peers are just a small fraction of the 500 million active TikTok users worldwide.

The creators of TikTok describe the app as “the leading destination for short-form mobile video.” These short videos can be up to 60 seconds, and the user can either create their own sound or select an audio that is already on the app. The user can then either dance to a song or create small, skit-like videos using sounds, text or other special effects.

Recently there has been much in the media with regard to the Chinese company, Bytedance, that owns the app. Many U.S. users have been worried that the Chinese government is involved with the censorship of the app.

However, the company has rejected these claims saying, “Let us be very clear: TikTok does not remove content based on sensitivities related to China. We have never been asked by the Chinese government to remove any content and we would not do so if asked.” Bytedance, according to bbc.com, is worth around 75 billion dollars and owns other social media apps. Although owned by a Chinese-based company, TikTok has no offices in China.

As of right now, even if there are no dangers due to alleged interference by the Chinese government, there are still privacy issues that users should be aware of. As soon as you create an account, TikTok has access to your contacts and any other information you have released through apps on your device. “We automatically collect certain information from you when you use the platform, including your IP address, location-related data, unique device identifiers, browsing history… mobile carrier, time zone setting, and mobile or device information,” says the company on its website.

Despite this, many Pace students are active users of the app and enjoy either making or watching the short videos. One student, junior Matthew Cleveland, has gained recognition on the app, with a couple of his videos receiving between 28 and 68 thousand likes. Cleveland currently has 15.8 thousand followers.

“I got famous from posting a video regarding what I hear about being good at basketball, and people just found it funny,” said Cleveland. “I like TikTok because it just allows you to be free and have a good time. It helps with stress and just makes you laugh.” Cleveland advises students who want to become “famous” on the app to “make funny and relatable videos.”

Other upper school students who find TikTok amusing spend a lot of time on the app per day. “I would say I spend about four hours a day on TikTok” said senior Dominique Turner. Sophomore Maggie Pope estimated that she spends about an hour a day on the app. “I think the app is entertaining, but it’s really easy to get distracted because I can never tell myself to stop scrolling,” said Pope. Cleveland estimates he spends about three hours a day on TikTok.

Unlike these students, some dislike the app. “I think TikTok is one of the most embarrassing things to have happened to our generation,” said senior Virginia Hobbs. “Not only do you look like an idiot making them, but I am confused what makes people think others want to watch them awkwardly dance in the Commons to a song.” Hobbs is also frustrated with the idea of people becoming famous by doing something that requires such little skill.

Even Cleveland admits that TikTok can be a distraction at Pace. “I think it’s somewhat of a problem because anywhere you go in school you either hear or see people on TikTok,” he said.