What It Means To Be a Good Classmate 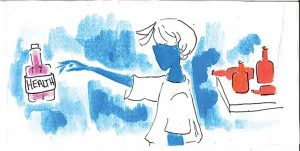 Nationally, 58.5% of high school seniors last year reported having tried alcohol before, and 39% of high schoolers reported trying marijuana as of 2017. These statistics from the Recovery Village show that alcohol and drug usage at the high school age is somewhat normalized in American culture. Adored television shows, hit movies and popular songs often lead young students to believe that their alcohol and drug use is proportionate to their popularity.

When studying the connection between music and alcohol consumption in teenagers, Dr. Brian A. Primack, Associate Professor of Medicine and Pediatrics and Director of the Program for Research on Media and Health at the University of Pittsburgh’s School of Medicine, concluded that “every year, the average adolescent is exposed to about 3,000 references to alcohol brands while listening to music.” In this way, Dr. Primack linked pop culture to drug normalization.

The danger of increasingly normalized high school drug usage is that risks begin to appear less and less threatening. Students all know the negative physical effects of drugs and alcohol. But, when students progressively perceive that more of the people around them are taking drugs, which is an effect of cultural normalization, students start to forget about the consequences of drug use. According to the National Institute on Drug Abuse, 71% of high school seniors don’t believe that regular marijuana smoking is harmful, even though marijuana, like alcohol, has serious adverse impacts on brain development in teens. The most relevant effect of normalized high school drug experimentation, however, is the failure to recognize when you have a problem.

Experimentation can lead to abuse and abuse can lead to addiction, particularly for those who have a genetic predisposition. Drug abuse can be signified in many ways. The Foundations Recovery Network suggests that, among other things, somebody struggles with drug abuse if they have experienced any of the following while under the influence or as a result of drug usage: legal problems, self-harm or physical violence, and inability to do what is necessary at home, school or work. The most relevant signifier of drug abuse within the Pace community as of late, however, is coming to school altered. Simply stated, doing drugs at school is indicative of a true drug problem, and somebody who relies on a substance to remove themselves mentally or emotionally during the school day needs help.

“Students will be expelled for possession, use or distribution of drugs on the Pace campus or on the campus of another school.” It is plain and simple. Straight from the Pace Academy Student Handbook, this is what you agreed to the moment you enrolled at Pace and reinforced when you signed the Honor Code book. Thus, it should come as no surprise that students who are caught using or distributing drugs on campus are asked to leave. It’s a precedent. It’s unavoidable. It’s inescapable.

Risking your Pace enrollment for a brief high during a free period is evidence of a substance abuse problem. Once a student is removed from the Pace community due to policy infraction, there is little help that the Pace faculty can offer. But, Pace offers plenty of support for struggling students while they are still Pace students. Thus, it’s imperative that students utilize the resources at their disposal to prevent expulsions and promote the wellness of themselves as well as the entire student body. Pace faculty members care deeply about their students, and from an interview, it is apparent that there is nothing Class of 2021 Dean Krista Wilhelmsen would rather do than to go back in time and find help for those unenrolled before it became too late.

According to addiction experts, most people who are in the throes of drug abuse or addiction are in denial that they need help. The solution is simple: find help for your fellow students before it gets to the point that you can’t help them anymore. We, as members of a close-knit upper school community, bear some responsibility to speak up when we see something that needs to change. That’s a basic obligation when you are a part of a community like Pace. We are taught to care for our friends and classmates, so why don’t Pace students seek help for their drug-abusing friends more often?

The social implications may seem severe for someone considering helping their friend, but in reality, nothing would be worse than losing a friend or peer to addiction. Most Pace students have formed incorrect assumptions about what happens once a student voices concern for one of their classmates. More often than not, students believe referring a friend to INSTEAD (Informing and Nurturing Students Through Education about Alcohol and other Drugs) or talking to a trusted faculty member about a friend would lead to discipline. But, the opposite is true!

The whole point of Pace’s having a built-in support system like INSTEAD is to find care and assistance for struggling students. INSTEAD was designed to help students from a strictly health-based perspective. It is not intended to catch or punish students, and the group goes to great lengths to keep the process private and separate from the Pace discipline system. Here’s how it works.

You can contact INSTEAD through email or by scheduling time to talk privately with one of the six faculty members: Mr. Ball, Tiger Brown, Dr. Moss, Mr. Smentek, Mrs. Terry and Mrs. Kann. They will ask that you complete a confidential referral form for your friend. The form allows you to label which concerning behaviors you identify in your classmate. After that, your part of the process is done and your identity is completely protected.

Thereafter, the INSTEAD faculty members will convene to discuss the nature of the referral and decide whether or not it is necessary to contact the classmate who was referred. If they deem it necessary, two INSTEAD members will find a time to meet with that student in complete privacy and at a time convenient to the student.

To dispel any misconceptions, INSTEAD does not accuse students of illegal behavior and demand confession. INSTEAD does not lecture or shame the student. Rather, INSTEAD simply communicates to the student that their friends are worried about him/her and that the school is there for him/her. INSTEAD operates as a safe space where students have time to self-reflect on their recent behaviors in the presence of trusting and caring adults. In those moments, students can either feel encouraged to ask for help and begin planning a path towards recovery, or students can deny ever using substances in the first place and walk out at their own free will. INSTEAD doesn’t hold students hostage.

In this way, it is really up to the student to decide whether or not they want to help themselves. If they choose to walk out of their meeting with INSTEAD members without taking the opportunity for self-reflection or inquiring about resources, then that’s their prerogative. But, if more people continue to refer that same student to INSTEAD, he/she may be required to meet with a school counselor.

The entire purpose of asking a student to have a discussion with educated advisors stems from a place of concern. “We do our very best to reassure students that we aren’t making a judgement on the accuracy of the concern, and that the fact that we are having the conversation does not in the least affect our opinion of them as students or people,” said INSTEAD member Mrs. Kann. “We reiterate that the student is not in trouble and that the conversation is completely private and ask if they have questions. We do our best to keep the care and concern in the forefront.”

True friends and classmates, then, must be the voice of reason and care. This article was not written to entirely condemn, nor condone, drug and alcohol usage. Rather, it stands as a call to action for the student body to look out for itself better – that classmates be better classmates.

Pay attention. Tell your friend you’re worried about them, seek help from the school faculty and take advantage of the school’s resources when you need to. As a Pace Knight, help your friends while they are still Pace Knights, and make sure a Pace Knight is who they will forever be.