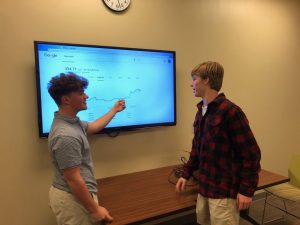 With the stock market’s recent developments, investors are ebullient as the Dow Jones and the S&P 500 are trading at record highs. The market hopes have come from prospective trade deals with China, which for example, will allow American companies to sell products to Chinese tech giant, Huawei. Paralleling the China trade deals, the market is booming because of better than expected job numbers over the past month. Analysts projected 90,000 jobs to be created during the October, but 128,000 new jobs were actually recorded. Also, 75% of businesses have reported beating their expected earnings (per Refinitive Data).

After Trump had been in office for three days, he signed an executive order withdrawing the U.S. from the Trans-Pacific Partnership (TPP). Trump also renegotiated the North American Free Trade Association agreement (NAFTA) back in 2018. These changes are in an attempt to achieve the president’s economic plan, which champions lowering trade deficits with foreign countries.

Earlier in October, however, China announced that the U.S. and China had reached a trade agreement, which is a major cause for the economic boom. More recently, it is unclear whether the deal will go through or crumble due to remarks made by the president and officials that the deal is still unofficial. The major components of the deal would be China’s agreement to buy American agricultural and technological products in return for the U.S. holding off on its planned tariff increase.

The markets will obviously fall back down (per usual), but at the moment, investing is still a great option as long as you pick stocks that still have the potential for growth. As high schoolers, real-estate investment and flipping houses is far-fetched, but investing in stocks is an actual, viable choice that kids can spend time learning about.

Free apps such as Robinhood and Acorns offer simplistic, sleek platforms that are perfect for beginning investors. On top of the simplicity, Robinhood charges zero commission fees – additional fees that are charged when buying and selling stocks. With that said, here are a few stocks for neophytes to look at for the upcoming holiday season.

A good place to start is to invest in companies that you personally use often or buy from. Companies such as Ford (F), Twitter (TWTR) and Ebay (EBAY) are companies whose stocks are relatively cheap and used every day by lots of high schoolers. Or, if you want to get in the holiday spirit, companies like Starbucks (SBUX), Delta (DAL) and Urban Outfitters (URBN) have increased sales during the holiday season due to vacations, clothing gifts or a nice, little hot chocolate. If you value the company enough to give it your money, consider investing in it.

Teladoc Health has been rising steadily since the beginning of September and is worth a look from new investors. Teladoc (TDOC) engages in virtual healthcare services via mobile devices and the internet. TDOC trades around $85 at press time and recently announced a deal with the Johnston Group. The deal will help the company expand into Canada.

There is a catch with TDOC, though. Amazon just released that they will provide healthcare services electronically as well. Some analysts see this new branch of Amazon as a threat to TDOC but others see it as bigger companies catching up to future innovations. Whichever way you view Amazon’s new release, Teladoc is a company to keep on your radar.

Slightly cheaper than TDOC, Enbridge Inc. (ENB) is one of the largest pipeline companies in North America. They operate vast oil and gas pipelines that transport these fuels to keep buildings warm. The key with ENB is their large natural gas reserve. According to the U.S. Energy Information Administration, “burning natural gas for energy results in fewer emissions of nearly all types of air pollutants and carbon dioxide (CO2) than burning coal or petroleum products to produce an equal amount of energy.”

The stock is currently trading at around $40 and has been markedly rising over the past couple of months. A super interesting and hopeful aspect of the stock is that the dividend (a sum of money paid periodically to investors) has been increasing for the past 25 years, which no other pipeline company has done in history (ENB Investment Community Presentation 2018). Investing in ENB is more of a long-term action because the natural gas sector is still developing, but buying now while the stock is cheap could pay off nicely in the coming decades.

Keep in mind, you should never invest in a stock based solely on advice from an analyst, and definitely not solely from me. You should always research a given company before you drop money into it. These are just my opinions, so be sure to do your homework before you get your investment portfolio started.