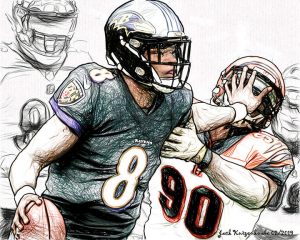 Behind second year quarterback and MVP frontrunner Lamar Jackson, the Baltimore Ravens have proven to be the league’s best team after taking down multiple NFL powerhouses including the Seahawks, Patriots, Texans and 49ers. Jackson currently leads all quarterbacks in QBR, total touchdowns and rushing yards while the Baltimore defense has only allowed 18.3 points per game, good for fifth in the league.

Seahawks QB Russell Wilson is another MVP candidate as he has thrown for 26 touchdowns to go along with only four interceptions. Seahawks linebackers Bobby Wagner and K.J. Wright are leading the team defensively as they rank second and sixth in total tackles among the NFL. All eyes will be on the Week 17 matchup between division foes Seahawks and 49ers that could possibly decide the fate of the division.

The 49ers have both a top offense and defense as they sit atop the NFC. They are second in the league in sacks with 45 and allow the least yards per game to opposing teams. The 49ers are a run-first team as they rank second in total rushing yards behind only the Baltimore Ravens. Their only two losses have come on last second field goals against the Seahawks and Ravens, two of the strongest teams in the NFL.

The Saints are the first team to clinch their division and a playoff berth. When future Hall of Fame QB Drew Brees went down with an injured thumb in Week 2, concern arose as to whether or not the Saints could stay in the playoff picture. Backup QB Teddy Bridgewater proceeded to win five straight games, proving there was no reason to worry, and that the Saints are the real deal. A win against the 49ers next week could bump the Saints up in the power rankings.

The Texans jump the Patriots in this week’s power rankings after defeating them 28-22 powered by Deshaun Watson’s four touchdown performance. Despite losing star pass rusher J.J. Watt early in the season, the team has continued to win football games. The Texans look to close out the season strong with two upcoming matchups against the red hot Tennessee Titans.

Bill Belichick’s Patriots looked near unbeatable through the first eight weeks of the season, outscoring opponents 250-61 while winning each game. Since then, the reigning champions  have gone 2-2, losing to the Ravens and Texans. Although the Patriots have the best defense in the league, allowing a league low 12.1 points per game to opposing team, their struggling offense proves to have issues that must be resolved if Belichick and Brady hope to win their seventh Super Bowl together.

The Buffalo Bills are shocking the world as they possibly make a run at their first division title since 1995. The Patriots have won the AFC East every year since 2009, but Sean McDermott’s Bills seem to be putting up a fight as they find themselves only one game behind the Patriots with four games left to  play. The Bills’ lights out defense has thus far allowed a mere 15.7 points per game, which ranks third best in the NFL. Star cornerback Tre’Davious White is a leader on the strong defensive unit as he is tied for the second most interceptions in the NFL with four. The Bills will be looking ahead to a big Week 16 matchup against the New England Patriots as they attempt to dethrone the current AFC East champs.

Despite struggling in the first few weeks, Kirk Cousins turned the Vikings’ season around as he threw for 15 touchdowns and did not commit a single turnover from weeks 5-10. Vikings RB Dalvin Cook is currently tied for first in rushing touchdowns with 12 and is fifth in rushing yards. Minnesota has won six of their last eight games and look to continue the hot streak as they face the Detroit Lions at home next week.

Although the Packers are 9-3 at the top of their division, the team’s performance has been underwhelming this season. They have barely squeaked out wins against a few mediocre teams and have lost to both the Chargers and Eagles who share a combined record of 11-13. The Packers were demolished by the 49ers in Week 12 by  a score of 37-8, failing to prove that they can hang with the ‘big dogs’ or are a legitimate threat to any top team in the playoffs.

The Titans began the season with a 2-4 record and Marcus Mariota starting at QB. In Week 7, Ryan Tannehill earned his first start at QB and since then Titans fans have been happy. Tannehill has gone 5-1 since the switch as the Titans continue to climb in the standings. RB Derrick Henry has thrived with Tannehill at QB as he ranks third in total rushing yards and is tied for second in rushing touchdowns with 11.

Despite being not nearly as dominant as last year, the Chiefs still find themselves in first place in their division. The decline in dominance is in large part due to the loss of RB Kareem Hunt. After averaging 115.9 rushing yards per game last year, the Chiefs only see 94.5 rushing yards per game this year, a significant decline. The Chiefs will most likely win their weak division, but they are not seen as strong  Super Bowl contenders with losses to the Texans, Packers, Titans and Colts.

The Los Angeles Rams are not the Super Bowl calibre team that we saw last year. Jared Goff is struggling with a QBR of 42.1, compared to the QBR of 63.6 that we saw last year. He has thrown 13 touchdowns and 12 interceptions, an atrocious ratio. Todd Gurley is not the same RB we saw last year either. After averaging 89.4 rushing yards per game last year, Gurley only runs for an average of 58.4 yards per game this year. If the Rams want to see the Super Bowl again, their former juggernaut offense must return to its old shape.

After a 5-2 start to the season, the Colts have now lost four of their last five games. The losing skid began with the injury of starting quarterback Jacoby Brissett, who is now playing, but does not seem to be 100% healthy. Behind a strong offensive line led by All-Pro Guard Quenton Nelson, the Colts could easily get back on track any week.

Wow. Somehow, someway, the Pittsburgh Steelers are still in the playoff picture. After losing Pro Bowl RB Le’veon Bell in free agency and trading Pro Bowl WR Antonio Brown, the Steelers were not expected to have a great season. Once veteran QB Ben Roethlisberger suffered a season ending elbow injury, it seemed to be a lost season for the Steelers. Throughout the season both RB James Conner and WR Juju Smith-Schuster have missed games due to injury, yet the Steelers still hold a record over .500.

This season has been a disappointment for the Cowboys to say the least. Despite having a top QB in Dak Prescott, a top RB in Ezekiel Elliot, a top WR in Amari Cooper, and the seventh best defense in terms of points allowed per game, Dallas has a .500 record. On paper, this team is stacked, and that is why head coach Jason Garrett and owner Jerry Jones are under close scrutiny. It is expected that Garrett will be fired at the end of the season.

As with Pittsburgh, it is shocking to see the Raiders still in the playoff picture. Head coach Jon Gruden received plenty of criticism last year after trading away star players Khalil Mack and Amari Cooper. The Raiders then acquired Antonio Brown and proceeded to release him before the start of this season due to his issues off the field. Most fans expected the Raiders to be the laughing stock of the league, yet here they are fighting for an AFC Wildcard spot. A young star also seems to be in the making in Oakland as 2018 first round pick Josh Jacobs is a frontrunner for the Rookie of the Year Award.