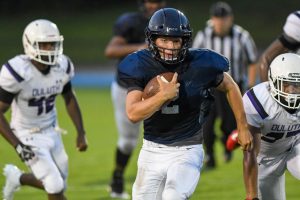 The first round of playoffs for the Pace varsity football team kicked off on Friday, Nov. 15 and within 15 seconds, senior Mbiti Williams wove his way past the entire Greater Atlanta Christian return team, securing a seven point lead for Pace. But the Knights lost a hard-fought battle 14-35, ending their season and the careers of many Pace football players who have been an integral part of the team for several years.

The team had 13 seniors who undertook the task of leading a freshman and sophomore-heavy team. Seniors Sam Harris, Jimbo Smith and Williams assumed the helm of this leadership, serving as the captains for the year. “The team grew a lot from the first summer practice to the last game,” said senior Evan Duncan.

Due in part to the intense summer and pre-season training, the team won five of their first six games, with region wins against Stone Mountain and Redan. “All the hard work in the summer showed as we were able to accumulate early season wins,” said Harris.

Not only did the seniors contribute through leadership, but also through their multifaceted play on the field. Williams played both ways for the Knights, but he was not limited to one position on each side. On offense, Williams was primarily a wide receiver, but he also lined up as running back, in the slot and even as quarterback a couple of plays.

He also led the defense as a defensive back, which is the position he will be playing when he goes to the Naval Academy after graduation this May. He served as kick returner with junior Jayden Thomas, and his efforts all over the field led to him earning a spot on the GHSA AAA All-Region team.

The defense was comprised of mostly seniors with Williams, Smith, Harris, Ben Caldwell, Morgan Payne, Will Rehmert and Duncan making up eight of the 11 starting spots. Smith has started at safety for three years and has been known as being one of the hardest hitters on the team since freshman year. Harris, Rehmert and Caldwell were a solid group of linebackers, making sure the other team got no easy yards all season.

Harris’ stellar performance earned him an honorable mention for the All-Region team. “I’m going to miss getting after it with the team,” he said. Payne and Duncan played defensive end and cornerback, respectively, where they both disrupted other teams’ offense all season.

In addition to leading the defensive unit, the senior class also made tremendous contributions on offense. Jack Jacoby returned to football this season and picked up right where he left off, playing the wide receiver position excellently all season and capping it off with a two-touchdown game on senior night against Towers. Connor Husk also made significant contributions as a running back this season, having three 100-yard rushing games.

“The team was so close, we were like a family,” said Duncan. “The football players spent as much time off the field together as they did on, if not more.” This bonding helped the team succeed on the field as well. “We were so tightly bonded that it translated onto the field and helped us be a better overall team,” said Harris. Whether it was going to dinner after practice, hanging out on off days or spending time together at school, the team had a good time and got much closer as the season went on.

Pace will face the task of replacing a strong senior class next season. “I trust that the upperclassmen will be able to step up to bigger roles next season and perform at a high level,” said Williams.