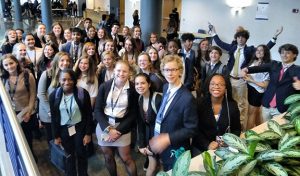 Twelve of the delegates from Pace were freshmen, and several more participated in their first-ever conference, with preparation beginning immediately after the beginning of the school year. “I was proud of our 12 freshmen,” said senior Paul-Louis Biondi. “They were all extremely prepared and they all managed to speak at least once in front of a large group of people.”

From late August to early November, Pace delegates researched, wrote and discussed the causes and possible solutions to the topics that they were given. After several Sunday meetings to run over procedure, notes and how to write a resolution, delegates were more than prepared to present and defend their ideas in committees that ranged from 26 to more than 100 people.

Their preparation culminated in a concise one-page position paper that laid out their country’s position on the topic at hand and how they believed it could be effectively solved. Students soon found they knew more than enough, as fitting all of their research and knowledge onto a single one-sided page became extremely difficult.

Throughout the two-day conference, delegates worked to solve issues spanning the conference theme, “mitigating the impact of humanitarian crises,” which, in many cases, took the form of how to aid migrants all over the world, and in others, dealt more with human rights and equality. Pace delegates worked hard to develop working papers that quickly became resolutions and played a large role in the ideas drafted within each committee.

In the end, all of the delegates’ hard work paid off. Freshman first-timers Eloise Gaudet and Mary Amelia Weiss received an Outstanding Position Paper award for their work as Nigeria in the General Assembly Plenary. Senior India Behl and junior Elliot Mathis also won an Outstanding Position Paper award for their representation of Germany in the General Assembly – Third Committee, as did juniors Isabel Battista and Sam Webb, who portrayed the German representatives to the United Nations Security Council.

For their outstanding work in preparation for the conference, as well as in the committee room, seniors Francesca Vaneri and Erin Hood were awarded both the Outstanding Position Paper award for Iran in the United Nations Industrial Development Organization (UNIDO) and the committee-wide award, which was chosen by their peers. Lastly, the German delegation, made up of 13 Pace students, won an Outstanding Delegation award.