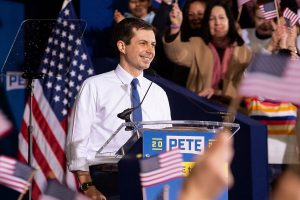 Pete Buttigieg is in the top tier for this debate and leading polls in Iowa. Photo: Wikimedia

Just weeks after its grand opening on Oct. 5, Tyler Perry Studios hosts the next Democratic debate at 9 p.m. on Nov. 20. This was announced to the public through former Georgia gubernatorial candidate Stacey Abrams on Oct. 25.

Atlanta Mayor Keisha Lance Bottoms fought for the debate to be held in Atlanta following the fourth Democratic debate in Houston and the announcement that the next debate would be held in Georgia. “With people of color being the cornerstone of the Democratic party, Atlanta remains set to provide a large portion of votes for our eventual nominee,” Mayor Bottoms told The Atlanta Voice.

Tyler Perry Studios is on the former site of Fort McPherson, a Confederate army base which was used as barracks for Confederate soldiers during the Civil War. Now the land is owned by an African American, a sign of how far America has come. The studio will showcase its 40 buildings on the National Register of Historic Places, 12 purpose-built sound stages, 200 acres of green space and a diverse backlot during the debate.

Atlanta will be pushed into the spotlight with this major event as voters tune in to the Democratic debate to try and select their future president. Sign-up for tickets is through this link. The sign-up is of no cost, but the tickets are very limited. If you are a member of a Georgia political organization or associated with a campaign you can acquire free tickets more easily since the DNC announced it would place priority on getting tickets to a handful of unions and advocacy groups.

The debate is expected to last two hours. It airs on MSNBC and will be live streamed on MSNBC.com and washingtonpost.com.