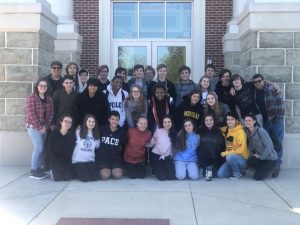 The cast and crew of “She Kills Monsters” pause for a photo outside Mary Persons High School on Nov. 9. Photo: Sean Bryan

The cast and crew of “She Kills Monsters” traveled to Mary Persons High School in Forsyth on Nov. 9 to compete in the GHSA AAA One-Act Play State Championships. After months of rehearsals, performances and preparation, the cast put on a strong show and secured a spot on the podium for the first time in Pace one-act history. The students were awarded fourth place.

The show itself addressed pressing and current themes such as homophobia, something that created even more meaning for the cast. “We address a lot of important issues in that show and if we, as an ensemble, give somebody hope or something to latch onto, then that’s a success,” said Upper School Visual and Performing Arts Chairperson Sean Bryan. “That’s what the students really gravitated towards, the importance of the story we were all telling. And that’s more exciting than the results.”

Placing for the first time in Pace history was a huge accomplishment that meant a lot to this cast. “Pace has never placed before, and we were in such good company on the podium, so it felt really great to see that we belong up there with them,” said Edwards. Mr. Bryan believes it was the students’ hard work that helped them succeed. “The fact that we made the podium, the top four, speaks so much to the work that the students brought.”